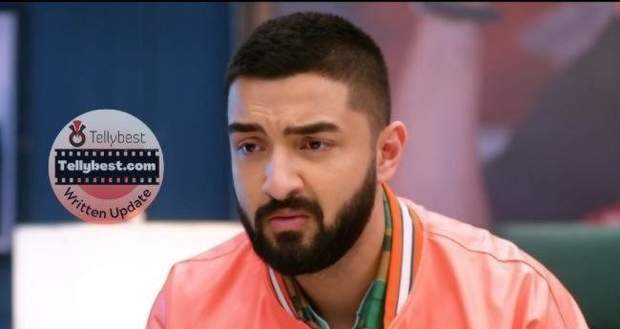 Entering the room, Sonal informs Malishka that it looks like Malishka is the one who recalls Lakshmi more than Rishi.

Sonal further advises Malishka to stay with Rishi in a way that will make him forget Lakshmi and Malishka announces that she will create new memories with Rishi.

Malishka adds that after marriage she will go on honeymoon for a few months to fill Rishi’s mind with new memories.

Sonal then suggests Malishka go to Europe for her honeymoon but Malishka says that she will go to Bali.

When Sonal keeps nagging Malishka about Europe, irritated Malishka orders her to stay out of her personal life.

Meanwhile, in Virendra’s office, Ayush calls Balwinder a pig after grabbing his collar and announces that he knows drool is dripping from Balwinder’s mouth seeing this much money.

He even threatens Balwinder by saying that he is getting this money for staying away from Lakshmi otherwise they will use this money to make his life hell.

In a meek voice, Balwinder complains to Virendra about this threat but Virendra mentions he can actually do it.

Balwinder tells Virendra that they have bought Ballu with this money and Virendra reminds him that he has given this money to clean garbage from Lakshmi’s life.

Balwinder adds happily that he will vanish from Lakshmi’s lide just as the horns get vanish from the donkey’s head.

Ayush again urges Ballu to not play this time then neither this donkey nor the horns will be spared from his wrath.

On the other hand, Rishi hears bhajan and gets confused as it is Lakshmi’s voice and he runs down the stairs faster.

However, he finds Harleen playing Lakshmi’s video on her phone and he also sits beside her.

Harleen asks if Lakshmi’s voice has touched his soul and Rishi replies positively.

Back on the streets, Balwinder calls Guddu and orders him to grab something strong before hearing this news.

Guddu asks Balwinder if he has gotten Lakshmi but Balwinder reveals that it is a different kind of Lakshmi.

When Balwinder mentions that he got five crore rupees for leaving Lakshmi, Guddu falls from his bed in shock.

Guddu asks Balwinder if he will leave Lakshmi for this money but Balwinder announces that he needs Lakshmi (money) to keep Lakshmi.

Once he cuts the call, Ayush hits Balwinder and Virendra announces that he has given milk to a snake.

Balwinder informs Virendra that everyone has the same blood and that his fate will work like magic after getting Lakshmi.

Balwinder walks away after yelling that he will earn fifty crores and will meet Virendtra soon with money.

In the Oberoi mansion, Harleen praises Lakshmi for giving Malishka justice and adds that she cannot see Lakshmi sacrificing her life like this.

Later on the streets, Balwinder notices Kamli who accuses him of marrying someone, and asks Balwinder what will happen to the baby.

Balwinder arrogantly reminds her that he has made the same promise to fifty other girls but it does not mean he will marry each one of them.

He walks away after ordering Kamli to go back to her village and he also pushes Kamli to the ground.

Afterward, Guddu shows Balwinder a dress and Balwinder reveals that Ayush took the money away.

Balwinder also mentions that those two butterflies (Shalu-Bani) will cause problems in his marriage with Lakshmi.

Balwinder even adds that he will marry Lakshmi the next day so he is going to meet a greedy aunt (Rano).

Later, in Bajwa's house, Balwinder orders Rano to arrange the marriage the next day and Rano goes to call Lakshmi.

When Lakshmi, Shalu, and Bani come out of the room, Rano happily announces that Lakshmi’s marriage will happen the next day.

© Copyright tellybest.com, 2022, 2023. All Rights Reserved. Unauthorized use and/or duplication of any material from tellybest.com without written permission is strictly prohibited.
Cached Saved on: Wednesday 25th of January 2023 09:59:54 AMCached Disp on: Wednesday 1st of February 2023 05:02:11 PM