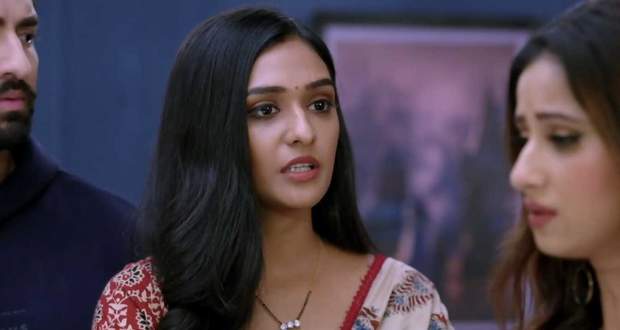 Before Malishka can give any reply, Harleen takes her hand to go with Ayush following them.

After they leave, turning to Lakshmi, Rishi asks her why she behaves rudely to Malishka.

Instead of answering, Lakshmi informs Rishi that he is only her husband.

Even Ayush tells her how Lakshmi has thrown Malishka out.

She further adds that all the Oberoi family members are again siding with Lakshmi.

Malishka’s loud voice wakes Neha up and she asks Malishka how can she do this.

However, Kiran and Malishka convince her that Malishka has done it for the Oberoi family.

Meanwhile, in the room, Rishi and Lakshmi get into an argument about Lakshmi’s bad behavior towards Lakshmi.

Rishi then starts walking toward Lakshmi and they collide with each other.

Staring at Rishi’s eyes, Lakshmi says that Rishi is only hers.

Seeing the possessive side of Lakshmi, Rishi is spell-bounded.

Rishi’s watch gets stuck in Lakshmi’s dupatta and he quickly pulls it out and walks to the other side awkwardly.

Later, he asks Lakshmi why she agreed to marry Balwinder in the first place.

Lakshmi then tells Rishi how she was just filling her father’s wish and Balwinder was the first person to approach her.

Hearing this, Rishi smiling says that fate has introduced them together.

Lakshmi and Rishi then look at each other with love.

On the other hand, in Dadi’s room, Shalu calls Ayush to learn about the situation.

Listening to Shalu and Ayush's conversation, Dadi orders them why they cannot flirt with each other like couples.

At the same time, Malishka thinks Lakshmi will steal Rishi from her.