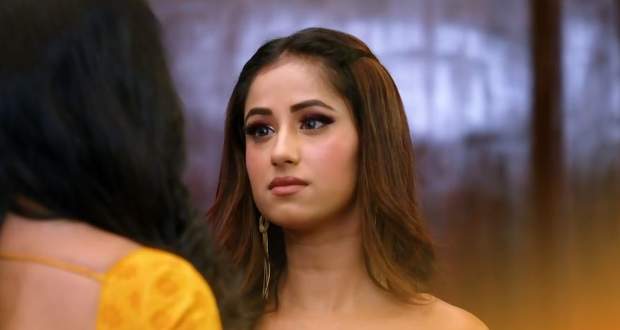 Today's Bhagya Lakshmi 18th May 2022 episode starts with Baani calling Lakshmi to check up on her.

Lakshmi assures Baani and Shalu that she is fine and disconnects the call saying that she has some work.

Further, Lakshmi continues to sob as she regrets believing that her bond with Rishi will stay forever.

On the other hand, Rishi is restless when Virendra comes there.

Virendra tells Rishi that he supports Rishi in his decision but all he wants is for Rishi should not take any decision in a hurry.

At the same time, Ayush arrives there and Rishi tells him that he is getting engaged to Malishka for which she is very happy.

Ayush asks Rishi whether he is happy but Rishi's answers are not much reasonable.

Though Rishi is not sure whether he is happy with his decision, he says that he is delighted to marry Malishka.

Rishi says he doesn't love her so he doesn't care to make her feel anything.

Later, Lakshmi talks to herself that she couldn't stop herself from falling for Rishi after seeing his real personality which is very sweet.

The next morning, Malishka arrives with Richa who is going to design new clothes for everyone.

Meanwhile, Lakshmi continues her daily routines which leads to a couple-like fight with Rishi.

Further, Malishka purposely chooses a dress for Rishi in front of Lakshmi.

When Richa sees Lakshmi, she tells Malishka that she'll arrange for a dress for Lakshmi too as she wasn't aware of her being a family member earlier.

Malishka says that Lakshmi is not that important but Rishi corrects by saying that she is important.