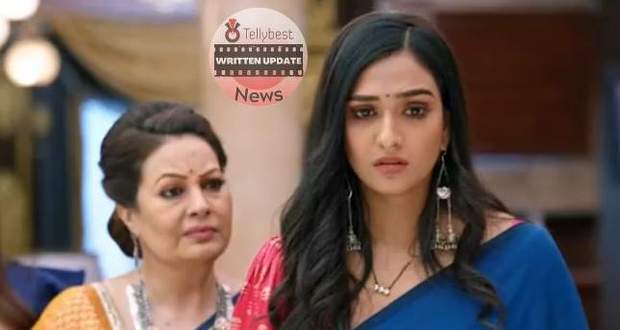 She even argues with god for always making Lakshmi’s life hard and Sahlu arrives there simultaneously.

Looking at Shalu’s face, Bani questions her if Lakshmi is okay but Shalu embraces Bani in a hug.

With tears in her eyes, Shalu explains to Bani about everyone accusing Lakshmi of Malishka’s kidnapping which shakes Bani.

Bani however tells Shalu that someone must be framing Lakshmi as she knows Lakshmi cannot do this and Shalu nods.

On the other hand, Malishka throws away the black cloth from her face with an evil grin and starts announcing how she downplayed Lakshmi by kidnapping herself only to get Rishi back.

Balwinder who was recording Malishka’s video praises Malishka for her brilliant acting and advises her to try acting.

Ignoring Balwinder’s nonsense, Malishka yells that now Lakshmi will serve the rest of her life in jail and she will get the chance to spend her life with Rishi tension free with confidence.

She further announces that not even "Lakshmi Bhagya" will save Lakshmi this time.

Balwinder also announces excitedly that if he had a brain like Malishka then Lakshmi would be his and he would have wealth so he could drive Lakshmi in an Audi car like Rishi.

Meanwhile, Kiran apologizes to Neelam for ruining the Oberoi family’s reputation but Neelam replies that Lakshmi is a bad omen for everyone and that Kiran is doing whatever she could to find Malishka.

Neelam further adds that Malishka is a brave girl and Lakshmi will reveal Malishka’s location once the police start interrogating her.

Meanwhile, Ayush feels guilty thinking about the accident and decides to tell everyone the truth as soon as he arrives home.

He then gets a call from Shalu, who indirectly asks him if he is alright, and confused Ayush nods.

Shalu further informs Ayush that Lakshmi is getting arrested for kidnapping Malishka which shocks Ayush.

In the meantime, the police are about to drag Lakshmi away but Neelam stops them.

Neelam once again urges Lakshmi to reveal the location of Malishka since she is Oberoi's family daughter-in-law in an authoritative tone but Lakshmi denies it.

Hearing this, Neelam orders the police to take Lakshmi away and Ayush arrives there at the same time.

Ayush then urges the police to let Lakshmi go since she was with him the last night.

He further tells the police half-truth that he got into an accident with a stranger due to the stranger’s fault and he has to rush that man to the hospital with Lakshmi’s help.

Hearing this, Kiran and Abhay yell that Ayush is lying and the police also question Lakshmi about the missing jhumka.

When Lakshmi informs the police that her jhumka got lost, the police give Lakshmi one day to prove her innocence.

After the police walk away, Ayush takes Lakshmi away while Neelam informs Kiran that if Lakshmi is guilty, she will surely pay.

On the other hand, Malishka orders Balwinder to go home to bring some cash for her and to inform Kiran about the kidnapping.

© Copyright tellybest.com, 2022, 2023. All Rights Reserved. Unauthorized use and/or duplication of any material from tellybest.com without written permission is strictly prohibited.
Cached Saved on: Monday 21st of November 2022 03:36:03 AMCached Disp on: Friday 9th of December 2022 05:46:48 AM