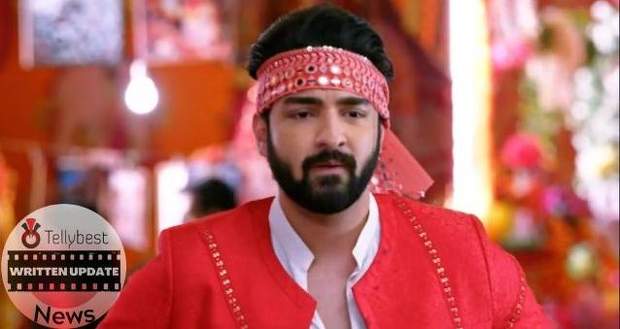 Today's Bhagya Lakshmi 18th October 2022 episode starts with Balwinder running with Rishi on his back.

Noticing  Malishka, Balwinder thinks today is terrible luck for him as Lakshmi and Malishka both are coming to rescue Rishi.

Though he feels confused by Malishka’s fast-paced walking, he chooses to ignore it and walks away with Rishi.

Meanwhile, Malishka opens the laptop while cursing Soniya for throwing tantrum for sharing the laptop.

Malishka stares at the laptop with pure terror when she finds the pen drive empty.

On the other hand, while Ayush and Shalu are busy chitchatting, Bani arrives there and offers them juice.

Bani then starts teasing Shalu and Ayush about their feelings and Lakshmi approaches them at the same time.

After quickly drinking the juice, Lakshmi starts blubbering about how she thought Rishi was joking about having an extramarital affair but now she thinks Rishi must have another girlfriend except Malishka.

Shalu takes Rishi's side and advises Lakshmi not to overthink but Ayush starts telling Lakshmi with a serious expression that indeed there is a third person in Rishi’s life.

Ayush twists his words while Lakshmi urges him to reveal the name in anticipation.

Shalu then grabs Ayush’s neck and accuses him of pulling Lakshmi’s leg and Ayush yells that Rishi loves his work more than anything.

Lakshmi however announces that Rishi loves teasing her and walks away angrily.

After Lakshmi walks away, Shalu along with Ayush and Bani exclaims that except Rishi and Lakshmi everyone knows about their love.

On the other hand, Malishka informs Kiran about Balwinder giving her an empty pen drive.

She even blames Abhay and Kiran for Balwinder’s anger while Kiran defends herself.

However, while taking Rishi in a cart, the pen drive falls from Balwinder’s pocket and Lakshmi picks it up.

Without thinking much about the pen drive, Lakshmi enters the room and gets confused seeing the bed empty.

She even apologizes to Rishi’s picture for overreacting and urges him to come back as soon as he can.

On one hand, a worker questions Balwinder about the cart; on the other hand, confused Lakshmi is thinking about why she gets jealous of other girls and why Rishi always teases her.

She even thinks only Rishi can answer her questions.

Meanwhile, Balwinder orders the snoopy worker to mind his own business and yells that Virendra has ordered him to bring this.

The worker sees Rishi’s face and escapes Balwinder’s hold to tell Ayush about it.

After cutting Malishka’s call, Balwinder runs after the worker and before the worker can say anything to Lakshmi, Balwinder starts a fire to distract everyone.

After Lakshmi walks away, Balwinder hits the worker on the head and the worker falls unconscious.

While Lakshmi informs Ayush about the worker, Neelam along with other family members are asking for Rishi.

© Copyright tellybest.com, 2022, 2023. All Rights Reserved. Unauthorized use and/or duplication of any material from tellybest.com without written permission is strictly prohibited.
Cached Saved on: Monday 21st of November 2022 05:59:44 AMCached Disp on: Sunday 4th of December 2022 11:19:01 PM