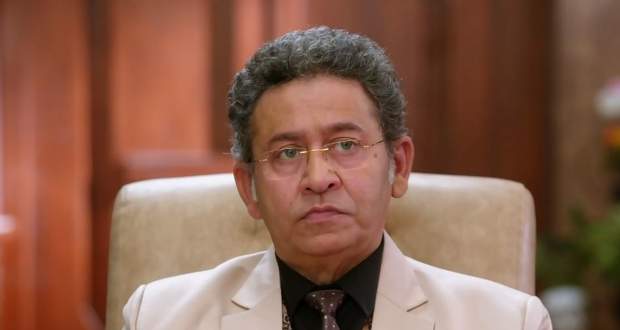 Today's Bhagya Lakshmi 19th April 2022 episode starts with Lakshmi compelling everyone to taste the sweet dish made by her.

However, Lakshmi interrupts Malishka when she tries to eat it by saying that she doesn't like sweets.

Rishi tells Malishka that the sweet is not good while Lakshmi smiles seeing Rishi gulp the last bite of the sweet.

When Lakshmi forces Rishi to eat lunch made by her, Rishi challenges her to reach the office at 1:30 PM sharp or else he'll complain to the judge that she does not take care of him.

Later, while Lakshmi cooks for Rishi, her mind keeps recalling Virendra's words. She feels guilty but determines to win his trust back.

After some time, Malishka comes to the kitchen and taunts Lakshmi by saying that her upbringing was to be made in a way to trap rich men.

Hearing the insults of her parents, Lakshmi chides Malishka and tells her to stop her naive and inhuman deeds.

Malishka tells Lakshmi that Rishi does not feel anything for her.

To Malishka's surprise, Lakshmi questions her presence in the Oberoi mansion if she trusted Rishi.

Further, Malishka asks Lakshmi not to come between them.

However, Lakshmi says that Malishka is the middle person in Rishi and Lakshmi's life.

Later, Malishka tells Karishma that she'll do anything to win Rishi.

On the other hand, Shalu comes to meet Lakshmi.

Lakshmi tells Shalu that Malishka may lower down to any level to separate Rishi and Lakshmi.