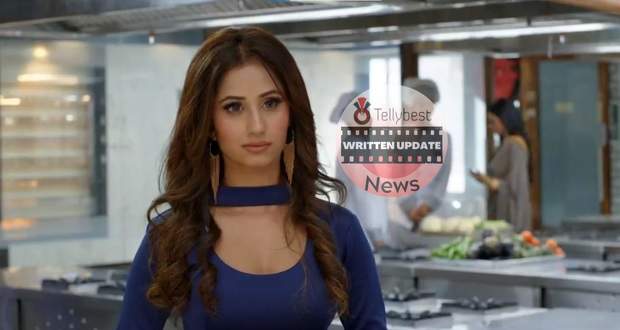 Today's Bhagya Lakshmi 19th August 2022 episode starts with Malishka manipulating Mukesh by informing him that if he doesn’t run away he will go to jail.

Hearing this, Mukesh gets sacred but he is not sure whether he should run or stay.

In the hospital, while Lakshmi is praying to God for everyone’s safety, Ayush calls Virendra to inform him about the food poisoning.

Hearing everything, Virendra orders Ayush to come home with Lakshmi to avoid the press.

At first, Ayush refuses to come home but when Virendra informs him that he will send his staff to handle the situation he agrees.

At the same time, Malishka informs Neelam about the food scandal.

As expected, Neelam starts blaming Lakshmi for everything.

After the call, Malishka calls a reporter with a smug smile and informs him about the food scandal.

Meanwhile, in the Oberoi mansion, Neelam comes downstairs and orders a servant to bring Lakshmi here.

Hearing her screams, everyone comes downstairs and asks Neelam the reason for her anger.

She thinks Lakshmi has ruined the Oberoi family's reputation with her stupidity.

After Neelam finishes, Ahana tries to defend Lakshmi but Neelam stops her.

At the same time, Virendra’s staff calls him and informs him that the food was poisoned.

Hearing this, Virendra is stunned as he is sure Lakshmi can’t make the mistake.

However, Neelam once again starts trash-talking about Lakshmi but Virendra stops her.

In meantime, Malishka is imagining how Lakshmi will get humiliated by the Oberoi family.

After she finishes her acting, she starts laughing like a devil.

She then calls Kiran to inform her about the food poisoning and requests Kiran to come to Oberoi's mansion to watch the live drama.

Malishka then narrates the whole story of how she has used Balwinder and mixed the poison in the food.

On the other hand, Lakshmi urges Ayush to talk to the doctor to know the reason behind people’s sickness.

Ayush then asks Lakshmi to inform Rishi about the situation.

Lakshmi declines to call Rishi as Rishi is alone in Bangalore but Ayush is persistent.

As Lakshmi and Rishi both are trying to call each other, the phone line is busy.

Later while Balwinder and his friend are fighting about Malishka, Rano eavesdrops on them.

Before Balwinder can see Rano, she runs away.

Lakshmi tries to defend herself but Neelam calls her bad luck.

Ayush along with Virendra tries to make Neelam understand that is not Lakshmi’s fault but she orders everyone to close their mouth.

© Copyright tellybest.com, 2020, 2021. All Rights Reserved. Unauthorized use and/or duplication of any material from tellybest.com without written permission is strictly prohibited.
Cached Saved on: Saturday 1st of October 2022 11:08:20 PMCached Disp on: Thursday 6th of October 2022 04:03:30 PM