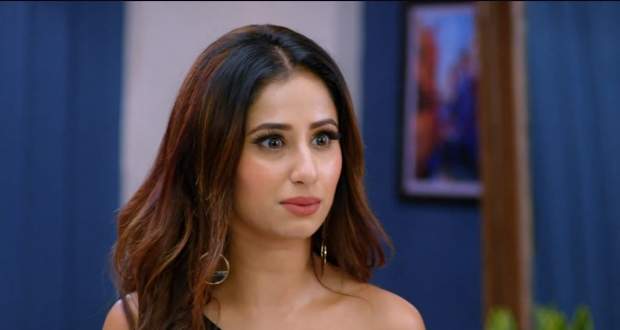 Today's Bhagya Lakshmi 19th July 2022 episode starts with Balwinder murmuring in his sleep that he does not want to die.

One of his friends then throws some water at Balwinder’s face to wake him up fully.

Opening his eyes, Balwinder thanks his friends for coming to save him from this hell.

They try to open the main gate but it is locked from the outside.

On the other hand, Dadi questions Ayush if he likes Shalu or not.

Ayush denies it as he thinks Shalu is not beautiful like his dadi.

To get the truth out of Ayush, Dadi also says that she thinks Shalu does not have any class.

Hearing this, Ayush quickly says that Shalu is beautiful.

At the same time, Shalu calls Ayush to inform him that she dislikes him.

However the phone is on speaker and after Shalu cuts the call, Dadi announces that she is sure they both like each other.

Afterward, Dadi orders Ayush to sleep beside her otherwise she will beat him.

When she turns to bed, she is shocked to see the bed empty.

She screams Rishi’s name and Rishi wakes up with a knife.

He then turns to Lakshmi with the knife.

Seeing the knife, confused Lakshmi orders Rishi to put the knife down.

They turn to the door to open it but the door is locked outside.

On the other hand, Balwinder opens the kitchen window for escape.

He informs Lakshmi that he has muscles as he goes to the gym every day.

Hearing this, Lakshmi tells Rishi about their village gym and how Wrestlers have more muscle than him.

This statement wounds Rishi’s ego and he asks her if she has lost her brain.

When Lakshmi looks at Rishi with confusion, he says that he is surprised to see this adventurous side of her.

Hearing this, Lakshmi starts laughing, and Rishi is amazed by Lakshmi’s face.

Their moment is ruined when they hear a thumping sound.

While Balwinder is about to jump out of the window, they hear a police siren.

He gets scared and decides to stay as he does not want to be beaten.

© Copyright tellybest.com, 2022, 2023. All Rights Reserved. Unauthorized use and/or duplication of any material from tellybest.com without written permission is strictly prohibited.
Cached Saved on: Monday 21st of November 2022 06:59:53 PMCached Disp on: Thursday 1st of December 2022 11:18:33 PM