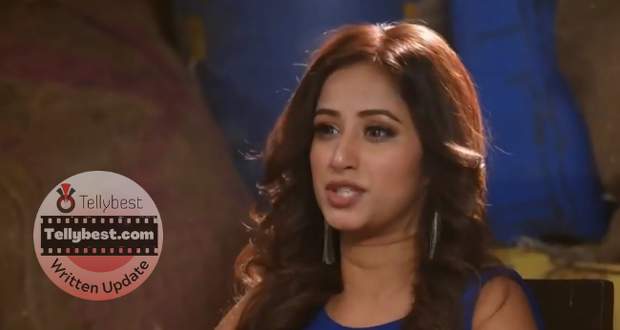 Today's Bhagya Lakshmi 19th November 2022 episode starts with Ayush thanking Lakshmi for standing by his side and embracing Lakshmi in a hug.

Lakshmi then guiltily informs Ayush that she has broken Ayush’s promise by telling Shalu about Ayush’s accident but Ayush announces that Shalu is his so it’s no big deal.

Looking at Lakshmi’s confused face, Ayush quickly adds that he meant to say Shalu is always on their side so it is okay.

Harleen arrives at the same time and praises Ayush for bringing Lakshmi home.

Ayush tries to tell Harleen the truth about last night with a guilty face but Harleen shuts him up and orders him to get fresh.

Later, Ayush enters the room with a sad look on his face and finding Rishi and his picture on the wall, Ayush promises that he will not repeat his mistake and he will become serious in his life.

On the other hand, while Harleen is talking to someone on call, Neelam enters the mansion and sits on the sofa with a furious expression.

Shalu arrives at the entrance but before Neelam can make any nasty remark, Harleen announces that she has invited Shalu.

Hearing this, Neelam storms away and Shalu tells Harleen that she feels guilty for causing problems for Harleen.

Harleen reminds Shalu that mother-in-law and daughter-in-law relationships are meant to be a mixture of sweet and sour times and Shalu nods.

Harleen further advises Shalu to meet Lakshmi in the kitchen and Shalu walks away excitedly.

Meanwhile, in Malishka’s house, Kiran gets stunned to see Balwinder in front of her and she orders Balwinder to leave.

Ignoring Kiran’s words, Balwinder questions her if Lakshmi is arrested to which Kiran replies negatively.

Hearing this, Balwinder's face falls and he informs Kiran that Malishka herself planned the kidnapping to teach Lakshmi a lesson.

Kiran gets instantly happy after hearing it and orders Balwinder to take her to Malishka immediately.

After giving in, Balwinder orders Kiran to bring some money since Malishka is high maintenance and Kiran walks away to get some.

Balwinder yells that he does not know which god Lakshmi prays to since she gets away every time as soon as Kiran leaves.

Meanwhile, Lakshmi questions Sahlu if now she understands why she was taking the blame for Ayush’s mistake while Shalu looks bewildered.

Lakshmi further adds that she knows Ayush can do anything for her which makes Shalu grin and orders Shalu to take Ayush’s breakfast to his room.

Ayush then compliments Shalu for her salwar kurta and Shalu blushes.

In the meantime, after bringing the cash, Kiran slaps Balwinder and orders him to take him to Malishka.

On the other hand, Ayush tells Karishma that he knows Lakshmi can never do it, and even if Lakshmi does anything like this in the future, he will stand by her no matter what.

Karishma feeling hurt by Ayush’s words and runs away from there and one by one other family members also walk away leaving Lakshmi crying on Harleen’s shoulder.

Meanwhile, Virendra finds Kiran walking away on the road and gets confused.

© Copyright tellybest.com, 2022, 2023. All Rights Reserved. Unauthorized use and/or duplication of any material from tellybest.com without written permission is strictly prohibited.
Cached Saved on: Monday 21st of November 2022 12:44:38 AMCached Disp on: Monday 5th of December 2022 12:16:37 AM