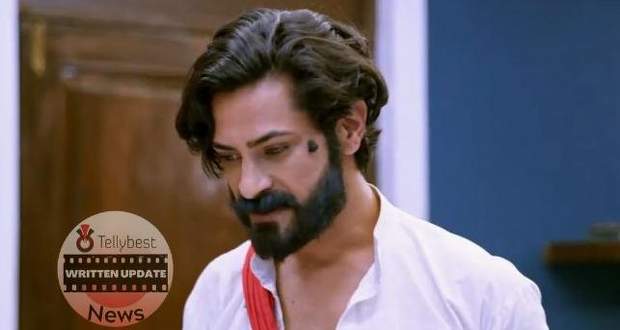 Ayush feels relieved after reading the text as he thinks Rishi will return soon.

Meanwhile, Balwinder tells unconscious Rishi that he will die as Ravan and one of Rishi’s family members will kill him.

He further bids farewell to Rishi by announcing that they will meet again as rivals in the next life.

On the other hand, Lakshmi recalls Rishi’s excitement about the Ravan Dahan and how he wanted to kill the Ravan so good could win against evil.

Worried Lakshmi calls Rishi several times but Rishi does not pick up.

Meanwhile, Malishka tells Kiran that she feels worried for Rishi as he is not picking up her call, and Kiran question if Balwinder has done something with Rishi.

Malishka orders Kiran not to think negatively and tries to call Balwinder but he does not pick up.

Meanwhile, looking at Lakshmi’s name on Rishi’s call, Balwinder yells that if Lakshmi has noticed his love for her then he would have treated her as queen.

He then sends Lakshmi a text that nowadays evil rules the world so Lakshmi should let someone else do the Dahan.

Lakshmi quickly realizes that Rishi is in danger reading the text and starts looking for him everywhere.

While searching for Rishi, Ayush comes near the Ravan puppet and feels as if Rishi’s perfume smell is there.

Malishka arrives there at the same time and questions Ayush if he has found Rishi.

Ayush angrily informs Malishka that he has not found Rishi and Malishka walks away feeling frustrated.

After Malishka walks away, Soniya arrives there and orders Ayush to change quickly.

She further adds that Lakshmi has become the Ravan of their family and Rishi listens to her more.

On one hand, Lakshmi is asking God about her Ram; on the other hand, Rishi comes back to his senses and starts struggling to free himself.

Meanwhile, Rano advises Neha to go to Ayush’s room and attract him so she can lead a luxurious life.

Later while Ayush is dressing up as Ram, Neha arrives there and thinks Ayush is the real Ram.

Ayush decides to play along and urges Neha to ask for a "var" (groom) wish.

When Neha questions what kind of "var" she should ask, Ayush yells that he has not opened a matrimonial site so she should ask something else.

Neha then starts listing all the qualities she wants in her husband and Ayush remarks that Neha is asking as if she needs ingredients for cooking.

Shalu arrives there in the meantime and informs Neha that Ayush is fooling her.

© Copyright tellybest.com, 2022, 2023. All Rights Reserved. Unauthorized use and/or duplication of any material from tellybest.com without written permission is strictly prohibited.
Cached Saved on: Monday 21st of November 2022 02:21:04 PMCached Disp on: Saturday 10th of December 2022 02:57:39 PM