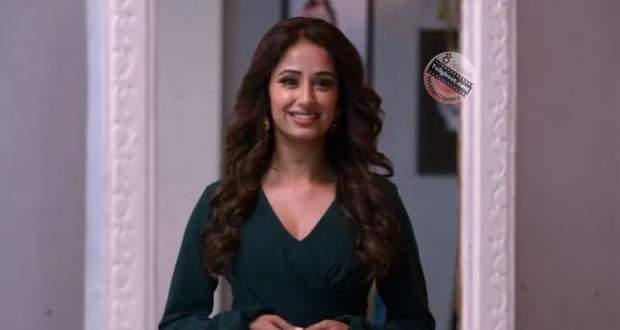 Today's Bhagya Lakshmi 1st December 2022 episode starts with Malishka telling Rishi that they would also have gotten married before Lakshmi came into the picture.

Malishka further questions Rishi if they will marry soon while Rishi hesitates to answer.

Noticing Rishi’s hesitation, Malishka announces that she has gotten the answer and she calls Lakshmi low-class.

Rishi fumes upon hearing Malishka’s words and screams Lakshmi has him so she does not need anything else.

Malishka angrily announces that Rishi does not want to divorce Lakshmi to which Rishi replies that he does not know what the future holds for him.

Malishka gets agitated hearing Rishi’s answer and tells Rishi that she hates him before leaving the room.

Kiran who was just entering the Oberoi mansion gets surprised to see Malishka storming away and she runs after her.

Later when Rishi is hurriedly walking so he can talk to Malishka, Harleen orders him to bring a glass of water for her.

Harleen orders Rishi not to go after her as soon as he arrives back and further adds that he needs to focus on Lakshmi now.

Harleen even advises Rishi to let Malishka deal with sadness herself otherwise she will think Rishi still loves her while Rishi nods.

On the other hand, Lakshmi starts grinning happily while touching the rose and thinking about Rishi’s gesture on the roof and puts a blanket on herself feeling shy.

In the meantime, Malishka is walking on the road aimlessly when a car is about to hit her but someone drags her away just in time.

Looking up, Malishka calls that person Rishi and the person walks away after ordering her to walk properly.

Maliska then breaks down crying as she realizes she has lost Rishi since Rishi has not arrived to talk to her.

Meanwhile, in the Oberoi mansion, Rishi meets Neelam in the hallway who praises Malishka for saving the Oberoi family.

Rishi then requests Neelam to give Lakshmi a chance while Neelam curls her hand in a fist.

Elsewhere, Kiran finds Malishka crying in the middle of the road and urges her to come home with her but Malishka drives the car away before Kiran can enter it.

After Malishka drives away, Kiran feels worried for Malishka.

In the meantime, in Oberoi's mansion, Rishi slowly pulls the blanket away from Lakshmi’s body and meets Lakshmi’s grinning face.

He then compliments Lakshmi by comparing her with the moon making Lakshmi blush.

Lakshmi also praises Rishi for always supporting her and questions him if he will ever change. In reply, Rishi announces he will never change.

Rishi then starts coming close to Lakshmi causing her breathing to quicken and she urges Rishi to stop coming close in a low whisper.

With love in his eyes, Rishi tells Lakshmi he needs to come close and Lakshmi holds her breath in anticipation after closing her eyes.

Rishi however picks up the hair from the eyelash that has fallen near Lakshmi’s nose and orders her to wish for something.

After Lakshmi wishes for Rishi’s well-being, she stands up and urges Rishi to let her go and Rishi replies that he is not holding her.

Lakshmi turns around hearing this while Rishi grabs the end of her saree.

On the other hand, Malishka hits a tea stall while cursing Lakshmi for snatching Rishi away.

Meanwhile, Kiran requests Sonal to come as Malishka needs her.

© Copyright tellybest.com, 2022, 2023. All Rights Reserved. Unauthorized use and/or duplication of any material from tellybest.com without written permission is strictly prohibited.
Cached Saved on: Wednesday 25th of January 2023 05:29:29 PMCached Disp on: Tuesday 31st of January 2023 07:17:04 PM