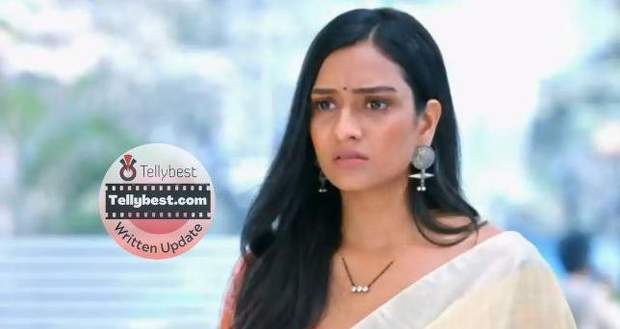 Today's Bhagya Lakshmi 1st January 2023 episode starts with Rishi telling Neelam that he does not want to marry Malishka.

In reply, Neelam tells Rishi that she knows Malishka is Rishi’s happiness so he has to marry Malishka with tears in her eyes.

Rishi then informs Neelam that he respects her very much but he will leave the mansion if she forces him to marry Malishka.

Neelam further manipulates Rishi by saying that if Rishi respects her then he should go back to his room otherwise she will leave the house too.

When stubborn Neelam decides to pack her bags, Rishi grabs her feet to stop her.

Rishi even promises to stay in the Oberoi mansion just like Neelam wants and walks away.

After Rishi leaves, Neelam orders Devika to keep this incident a secret, and Devika nods.

Once Devika also walks away, Neelam tells herself that she will not force Rishi as Rishi himself will decide to marry Malishka for her happiness with a smirk on her face.

On the other hand, in Malishka’s home, Kiran tells sobbing Malishka that Neelam will make Rishi agree to the marriage at any cost.

Kiran further urges Malishka not to worry about the marriage this much but ironically Malishka informs Kiran that she does not want to force Rishi to marry her.

After Kiran walks away, Sonal shows Malishka the poison in her hand while muttering that this will create a big drama in the Oberoi mansion tomorrow night which confuses Malishka.

Sonal replies that killing Lakshmi will not benefit them when Malishka questions her if she is planning to kill Lakshmi.

Sonal further tells Malishka that she is eagerly waiting for a person to die who will be a trump card for Rishi-Malishka’s marriage and Malishka gets worried.

Meanwhile, in Bajwa's house, Lakshmi feels shattered thinking about Rishi-Malishka’s marriage but she reminds herself that she is not in Rishi’s life anymore.

Elsewhere in Oberoi's mansion, looking at the couch, Rishi gets upset recalling Lakshmi’s smiling face whereas Lakshmi is also thinking about him.

Rishi puts Lakshmi’s photo on the couch and a blanket on top of it to recreate the way Lakshmi used to sleep while the “Teri Hogaiyaan” song plays in the background.

Once done, Rishi lies on the bed facing the couch and wipes a tear that was rolling down his cheek.

The next morning, Virendra walks away without talking to Neelam who thinks that soon Virendra will soon forget about Lakshmi and make Malishka his daughter.

Afterward, Neelam calls someone to order him to meet her and after cutting the call, she tells herself that now Rishi will not even think about Lakshmi.

Meanwhile, in Bajwa's house, Ayush embraces Lakshmi in a tight hug and tells her emotionally that everything is empty in the Oberoi mansion.

He even asks Lakshmi to spill the reason behind the divorce but Lakshmi remains silent.

He further orders Lakshmi to get ready as they need to meet Virendra which makes Lakshmi excited.

On the other hand, Rishi calls Kiran to inform her that he does not want to marry Malishka but Shalu enters the room just then.

© Copyright tellybest.com, 2022, 2023. All Rights Reserved. Unauthorized use and/or duplication of any material from tellybest.com without written permission is strictly prohibited.
Cached Saved on: Wednesday 25th of January 2023 05:12:28 PMCached Disp on: Wednesday 1st of February 2023 07:12:59 PM