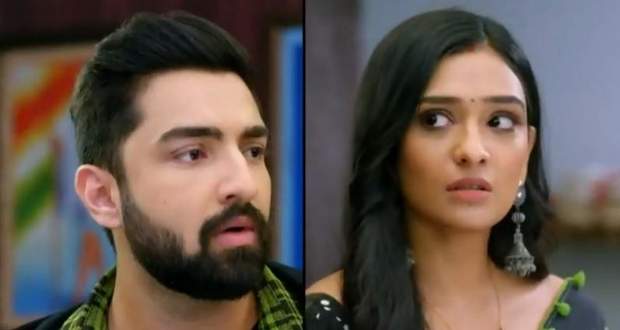 Today's Bhagya Lakshmi 1st July 2022 episode starts with Rishi asking Ahana if everything is alright or not.

Ignoring Rishi’s words, Ahana reveals to the judge that she is the one who is pregnant.

Rishi is left astonished as he gets the flashback of Lakshmi’s pregnancy announcement and stares at Lakshmi with shock.

Elsewhere, Balwinder arrogantly tells Rano that he is waiting for Lakshmi and 1-2 crore rupees.

He even proposes Rano become his maid as Lakshmi is pregnant.

Rano informs him that Lakshmi will never be his as she is pregnant with Rishi’s child and tries to walk away.

However, psycho Balwinder grabs Rano from behind and informs her that he does not know who the real father of Lakshmi’s baby is but he is ready to give him/her his name.

Frightened, Rano begs for forgiveness and runs away from there.

Later in the court, Ahana informs the judge of everything but when she mentions that she has broken her engagement, Lakshmi asks Rishi to stop questioning as they need to save Ahana’s engagement.

On the other hand, while Mrs. Guzral accuses Ahana of being characterless, Ayusha along with other Oberoi family members tries to calm them down.

As Mrs. Guzral opens the door to leave, she collides with Ahana.

Seeing Ahana along with Karishma, Mrs. Guzral starts questioning her about leaving.

Mrs. Guzral then notices Lakshmi and accuses her of playing with her trust.

Hearing this, Rishi firmly announces that Lakshmi is his wife leaving everyone shocked.

Lakshmi defuses the situation by announcing that Ahana wanted her brother and sister-in-law to be with her during the big day.

Hearing this, Gautam’s parents calm down and agree to the engagement.

On the other hand, Rano screams at Neha and Shalo for ruining her reputation by being pregnant with someone else.

She even orders Shalu to make food for them otherwise she will send her back.

Meanwhile, Balwidner angrily announces that he will kidnap Lakshmi so he can take her with him.

However, he collides with Dadi when he enters the Oberoi mansion.

© Copyright tellybest.com, 2022, 2023. All Rights Reserved. Unauthorized use and/or duplication of any material from tellybest.com without written permission is strictly prohibited.
Cached Saved on: Tuesday 22nd of November 2022 09:06:40 PMCached Disp on: Saturday 3rd of December 2022 02:09:56 PM