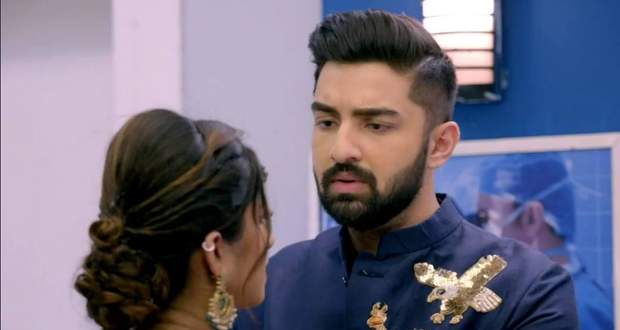 Today's Bhagya Lakshmi 1st June 2022 episode starts with pandit ji telling the Oberoi family that they have only twenty minutes before the next auspicious moment for engagement begins.

Hearing this, Rishi gathers everyone for a dance performance.

Seeing this, hurt Lakshmi tries to walk away but Rishi stops her and pulls her into the dance.

After the dance, Lakshmi walks away from there.

When worried Shalu tries to run after Lakshmi Neelam stops her and calls her a troublemaker.

Therefore, Panditji tells them the moment has arrived for the engagement.

Hearing this, Malishka runs to call Lakshmi to see her and Rishi’s engagement.

While Lakshmi and Malishka get into a heated argument about Rishi, Lakshmi announces that she will go to witness their engagement.

However, when Malishka and Rishi open their engagement ring box they find them empty.

Seeing this, everyone starts accusing Lakshmi of stealing the engagement rings.

Like always no one believes her and Malishka orders her to find the rings.

Although Lakshmi agrees, she makes it clear that she is doing it just to prove her innocence.

Meanwhile, Shalu stops Lakshmi from searching for the ring by telling her that she does not need to prove herself.

Hearing this, Lakshmi protests by saying that she will search for the ring to prove her innocence.

Later Blawinder attacks Rishi with a knife and before he can stab him Lakshmi puts a blanket on him.

However, before they can catch Balwinder, he flees, and Rishi along with Lakshmi runs after him.

In the middle of the run, Blawinder collides with Malishka who saves him by locking herself and Balwinder in her room.

In the room, Malshika and Balwinder fight over their plan, and when Lakshmi and Rishi enter her room she acts like a victim.

Later she hugs Lakshmi and says sorry to her in a sarcastic tone.

Therefore, Lakshmi accuses Rishi of not believing her every time and walks away from there.

In the end, Lakshmi meets Virendra and Neelam and tells them she wants to talk.