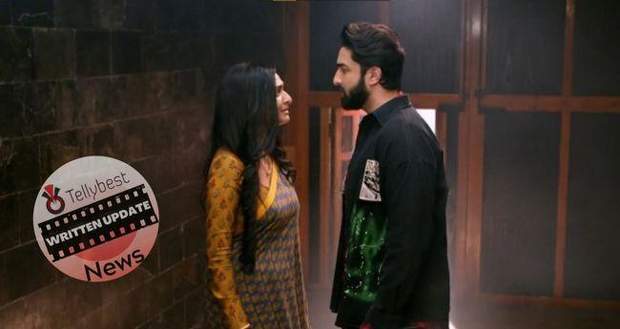 Shalu gets tensed since now they won’t be able to meet Lakshmi but Aayush convinces her that he can do anything for her.

Aayush and Shalu go to the police station and Aayush begins his drama and emotional acting in front of the inspector.

He also tells Shalu to comply and go with his act, thus Shalu begins acting saddened and lost.

Later, Aayush asks the inspector to give him a minute to talk in private.

Hesitatingly, the inspector agrees and Aayush takes him to the corner with a suspicious Shalu looking at them.

Meanwhile, Ahana and Dadi get worried about Lakshmi and are in the living room pondering if Rishi will be able to save Lakshmi.

Suddenly, Rishi arrives and by noticing the absence of Lakshmi, Ahana asks about her.

Rishi explains that she won’t be bailed before the trial in court and further continues that they have already contacted the best lawyer for Lakshmi.

Rishi gets worried about Neelam being upset with him and thus goes to her room to explain his actions.

Rishi states that Lakshmi has not done anything wrong and he will prove it in court for her.

Neelam dictates that no matter what the world says but she would never accept Lakshmi as her Daughter-in-law.

He tells her that Neelam made him understand that one should respect the relationship no matter what and for that sake he went against Neelam to respect their bond of a husband and a wife.

He hugs Neelam to comfort her and says that he will never do anything intentionally to hurt his dear mother.

Finally, Neelam’s annoyance leaves her and she hugs Rishi back.

Meanwhile, Malishka meets Balwinder and tells him about Rishi's vow to find the criminal and Balwinder explodes.

He asks Malishka to give him money and makes fun of her that Lakshmi outdo her every time and Malishka gets irritated with him.

In the police station, Aayush tells the inspector to help him in his love story by faking scenarios of friendship between their future children and knitting dreamy thoughts of bonding between them in the inspector’s head.

The inspector gets instantly ready to allow them to go and Aayush takes Shalu to Lakshmi.

Lakshmi overwhelms with joy as she sees them and tells them to not worry since Rishi will save her soon.

Aayush tells the situation of bail but Lakshmi tries to be strong.

Aayush suddenly takes Shalu’s hand and begins caressing the injury while Shalu gets lost in him.

Lakshmi sees the view and begins wondering if the duo is just friends.