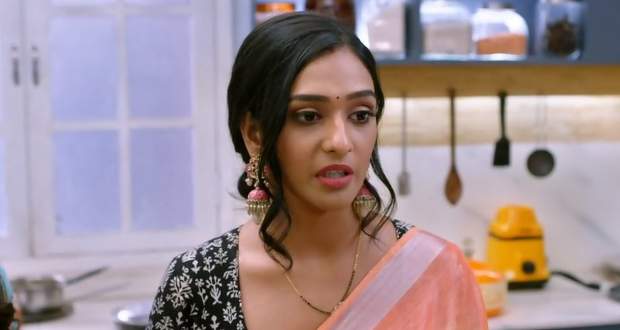 Today's Bhagya Lakshmi 20th April 2022 episode starts with Karishma going to the kitchen and smartly ruining Lakshmi's food by spilling everything that she prepared for Rishi.

Later, Shalu witnesses Karishma and Malishka celebrating their win and informs about the same to Lakshmi.

However, Lakshmi tells Shalu that she just wants to stay around Rishi to keep him safe from the trouble in his horoscope.

When Malishka goes to the canteen, she sees Rishi and Ayush are already having their lunch made by the chef.

After some time, Lakshmi arrives there.

Further, Rishi and Malishka continuously praise the taste of the food they are having and taunt Lakshmi for being late to bring the lunch.

To everyone's surprise, the chef reveals that the food was made by Lakshmi.

With this shock, Malishka spits out the water in her mouth while the chef gives Lakshmi's hand to Rishi as he wanted to kiss the chef's hand.

Compelled by his statement, Rishi kisses Lakshmi's hand while Malishka burns in anger.

Later, Lakshmi goes to Rishi's cabin for some work.

Unfortunately, Rishi overhears Lakshmi telling Shalu that she is finding reasons to stay near Rishi.

When Lakshmi notices Rishi, Lakshmi tries to explain herself.

Asking how near she wants to be with him, Rishi starts walking toward Lakshmi and stands extremely close to her leaving no space for even a paper to pass through them.

However, Lakshmi walks away and says that he is misunderstanding her words.

Rishi's ego gets hurt when Lakshmi tells him that she does not intend to come close to him in a sexual way.

To arouse Lakshmi, Rishi sensually moves closer to her but Lakshmi acts unaffected and starts laughing at him.

Laughter makes Lakshmi lose her balance and she falls into Rishi's arms.

Suddenly, Malishka enters the cabin and witnesses the romantic pose.