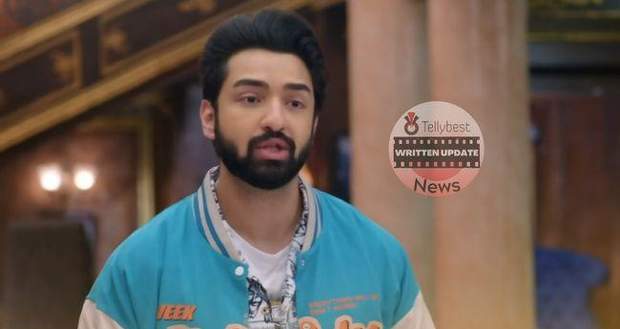 She yells at Aayush for trying to defend Laxmi.

In the middle of the scenario, Neelam’s phone begins ringing and she asks Malishka to get it for her.

Malishka supinely follows to Neelam’s room while Neelam accuses Laxmi of giving consequence to this accident but Laxmi just keeps crying her eyes out.

Uday has called her to fix an interview with her regarding the incident that happened in their hotel but Malishka pretends to be Neelam and insults him by saying that poor media people like him seek a chance to destroy prestigious families.

She further challenges him if he has the guts then try to accuse Laxmi of the same but he shall see the consequences then and hung up the call.

Uday feels very insulted and decides to tear apart Neelam’s pride by accusing Laxmi is responsible for the mishap.

He tells the police that the doctor has confirmed poison in the food and that Laxmi Oberoi is guilty.

On the other hand, Shalu sees Neha watching the news channel where Uday accuses Laxmi of the deliberate accident.

She begins defending her when Neha taunts Laxmi.

In the Oberoi House, Rishi keeps calling Laxmi but she couldn’t pick up because she is in the hall with everyone.

Malishka brings Neelam’s phone to her and says it was just a message tone and nothing much to worry about.

Laxmi asks Virendra to check what is going on in the hospital and Virendra says that he sent Mayank for that.

Virendra shows his trust in her and consoles her that she did not do this on purpose.

In Malishka’s room, Malishka tells Kiran that she wanted to throw Laxmi out and dreams of Rishi throwing her out of the house and ending their relationship.

So she tells her that since Rishi’s reputation is very important to him he himself would throw Laxmi out of the house.

Laxmi is crying in her room when Aayush comes to console her and tells her that she is a superwoman. She tells him that she is concerned about the people in the hospital.

In Malishka’s room, she is about to call Rishi and tell him when Kiran stops her.

Malishka agrees and hugs her for being with her always.

Kiran tells her not to worry and starts preparing for her and Rishi’s marriage but they find Neelam at the door and get bewildered.

© Copyright tellybest.com, 2020, 2021. All Rights Reserved. Unauthorized use and/or duplication of any material from tellybest.com without written permission is strictly prohibited.
Cached Saved on: Saturday 1st of October 2022 11:41:02 PM