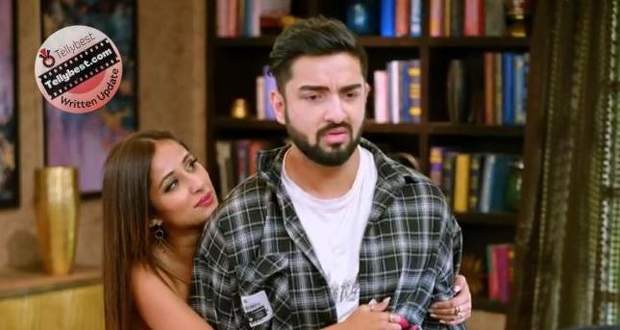 Today's Bhagya Lakshmi 20th December 2022 episode starts with Rishi and Lakshmi sitting in the room quietly while thinking about the earlier incidents.

Rishi watches Lakshmi shed tears and feels guilty for whatever happened with Malishka.

Ayush enters the room and asks Rishi and Lakshmi why they are sitting separately with gloomy faces.

Asking Rishi and Lakshi to get ready quickly for the court, Ayush tells them to relax and state clearly that they want to be together.

That way, their marriage will not break off and the court will dismiss the divorce.

Ayush leaves after asking Rishi and Lakshmi to hurry up with the gloomy atmosphere again rendering in the room.

Rishi gets up from the bed and goes to the washroom with his clothes while Lakshmi continues to cry silently.

After entering the washroom, Rishi asks himself why he destroyed everything with his hands and starts slapping himself.

Rishi rubs off the lipstick marks all over his body and stares at himself with disgust in his eyes.

Meanwhile, Lakshmi recalls her lovable moments with Rishi while staring at the broken wedding photo lying on the ground.

Rishi cries after getting in the shower while the water washes off all the lipstick marks from his body.

At the same time, Neelam and Virendra start to argue over Rishi and Lakshmi’s final divorce hearing.

Virendra asks Neelam not to instigate Rishi into saying something wrong in front of the judge while Neelam replies that she knows what is best for Rishi.

Harleen comes and stops them from arguing further saying that they are not a family which pressurizes the couple to take a divorce.

Back in Rishi’s room, Rishi sits on the bed and finds his and Lakshmi’s wedding picture.

Hugging the photo close to his heart, Rishi asks Lakshmi not to hate him in his heart as he cannot bear that.

Lakshmi gets ready and both of them come downstairs to go to the court.

Harleen gives Rishi and Lakshmi two white flowers saying that those are from the god which will help them in deciding things.

Meanwhile, Malishka grooms herself beautifully so that she can distract Rishi with her beauty.

Sonal assures Malishka that there is no comparison of beauty between her and Lakshmi and Rishi will always choose her.

All the family members reach the court where Shalu and Rano were already waiting for them.

Rano prays for the marriage to be resolved without a divorce as she plans to make Shalu Ayush’s wife.

Rishi and Lakshmi proceed toward the judge’s office and bump into Malishka who asks them not to let yesterday’s thing affect their case.

The judge welcomes Rishi-Lakshmi, and their families and starts the final hearing of the divorce case.

Ayush reminds the judge about the terrorist attack as she appreciates both Rishi and Lakshi’s efforts to save the marriage.

Rishi and Lakshmi stare at each other with blank eyes as everyone compliments their chemistry.