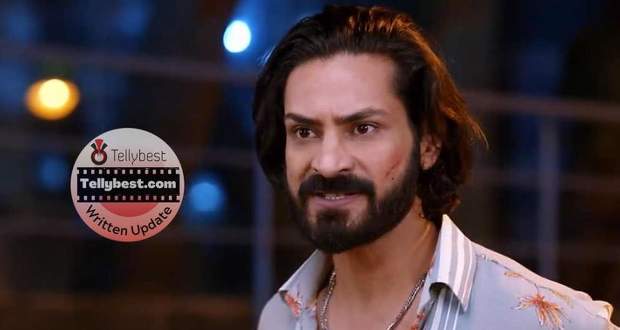 Just then, Neha urges Rano to wait as she needs some time to get ready and Rano announces that she knows Neha will take more time than the bride.

After Neha walks away, Rano urges Lakshmi to get ready when Shalu sets the lehenga on fire out of anger.

This makes Rano very angry and she is about to hit Shalu but Lakshmi grabs her hand.

Rano rebukes Lakshmi by saying that she is stopping her aunt to which Lakshmi replies that she is just stopping someone from hitting her sister in a firm voice.

Rano even says that she knows Lakshmi will back out of the marriage with a hint of frustration.

Meanwhile, Balwinder tells Guddu that the bride must have gotten her lehenga since Rano, his cousin mother-in-law is calling him.

He greets cousin mother-in-law with a cheerful voice but his face falls suddenly.

On the other hand, Virendra and Neelam get shocked when the servant announces that Lakshmi and Rano have arrived.

Virendra urges Lakshmi to enter the mansion and he even scolds Neelam when she orders Lakshmi and Rano not to enter.

One by one all the family arrives in the hall and Karishma looks at Lakshmi with a disgusted look whereas Harleen gets extremely happy.

In the meantime, in Malishka’s home, overjoyed Abhay tells Malishka that they have to arrange the marriage soon since Rishi’s mind can change at any time and Lakshmi can also make her come back.

Back in Bajwa's house, Shalu and Bani are praying to lord Ganesha to help them since they don’t even have their parents to ask for help.

Meanwhile, Lakshmi refuses to cross the threshold of the Oberoi mansion despite Virendra’s pleading.

When Lakshmi asks Virendra if he will grant her a wish, Virendra announces that he will always fulfill his daughter's wish.

In the meantime, Karishma and Neelam are discussing Virendra’s viewpoint as they think Virendra will give Lakshmi all the property if she asks for it but Harleen rebukes them for it.

However, Lakshmi urges Virendra to do her kanyadan but Virendra refuses as he himself wants to stop the marriage.

Lakshmi emotionally blackmails Virendra by saying that she will be sad for some time but it is okay if Virendra is not ready.

On the other hand, Neelam is about to yell at Lakshmi but Karishma stops her by reminding her that it is a perfect chance as they will be able to make sure Lakshmi’s marriage happens for real.

Nodding her head, Neelam tells Virendra that he is the one who declared Lakshmi as his daughter so they will do Lakshmi’s kanyadan.

Rano walks away with Lakshmi after inviting the whole Oberoi family to the marriage.

On the other hand, Balwinder happily informs his friends that he knew Shalu would do something like this so he already brought two lehengas.

When Guddu teases Balwinder by saying something will happen in the night, Balwinder mentions that it is his third first night but gets angry as Guddu tells him that Lakshmi also might have spent the first night with Rishi.

Balwinder announces that he is the one who will celebrate the first night with Lakshmi.

Meanwhile, in the Oberoi mansion, everyone is discussing Lakshmi's marriage when Malishka and her parents walk in.

Later, Malishka is about to enter Rishi's room as she finds him going through his wedding album.