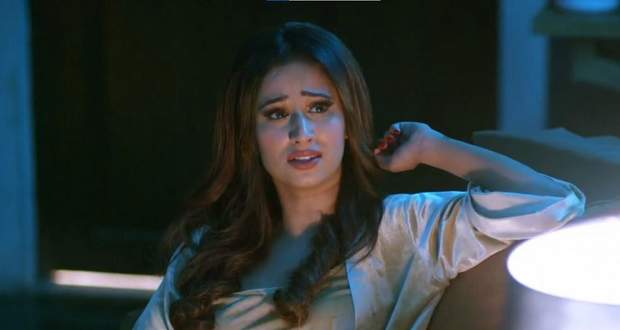 Today's Bhagya Lakshmi 20th July 2022 episode starts with Malishka and Kiran thinking about who can call the police this time.

Lakshmi opens their door and Malishka asks her if Balwinder has run away.

Instead of answering, Lakshmi asks her why she wants to learn about Balwinder first thing.

Ignoring Lakshmi’s taunt, Malishka tells her that she asked unconsciously.

Elsewhere, Harleen is trying to wake Ayush up by changing her voice into Shalu’s voice.

This technique works as Ayush quickly wakes up from his sleep.

Harleen then informs Ayush about the police siren and locked door.

Ayush walks towards the door to check and Lakshmi opens the door.

Lakshmi then informs them about Balwinder trying to run away.

Meanwhile, in the living room, Rishi shows everyone how he used their sound system and red light to create a police siren.

Realizing his stupidity, Balwinder sits on the floor with a hand on his head.

To clear everyone’s confusion properly, Rishi narrates how Lakshmi has given the idea to use the system for their benefit.

Hearing the story, Ayush along with Dadi praises Lakshmi for her brilliant idea.

Karishma however denies it by claiming that they are here dealing with cheap Balwinder because of Lakshmi.

Before Rishi can beat Balwinder, he falls at Lakshmi’s feet and accuses her of hiring him to do drama in the Oberoi mansion.

Recalling Rishi's words about taking a stand for herself, Lakshmi scolds him for accusing her falsely.

Even Rishi and Ayush come forwards to beat Balwinder as they believe Lakshmi is innocent.

Dadi also urges Balwinder to open his mouth and Balwinder thinks to himself whose name to take next as no one believes his accusation of Malishka.

He then blames Neelam randomly and Lakshmi slaps him hard for it much to Neelam's shock.

When Lakshmi orders Rishi to call the police, Balwinder runs towards the kitchen.

Ayush follows him and they start playing kabaddi.

When Ayush stops to take a breath, Balwinder asks Dadi to bless him so he can run away.

Rishi then attacks Balwinder but he picks up the knife and puts it on Rishi’s neck.

Using her common sense, Lakshmi throws a stick toward him and Rishi falls to the ground.

While everyone is busy asking Rishi if he is okay, Balwinder locks himself in a room.

A flashback shows, how Malishka has paid Balwinder to stay silent and take anyone’s name except hers.

She has even ordered him to use the guest room window to run away.

Much to Balwinder’s bad luck, he is stuck in another room that has no windows.

© Copyright tellybest.com, 2022, 2023. All Rights Reserved. Unauthorized use and/or duplication of any material from tellybest.com without written permission is strictly prohibited.
Cached Saved on: Monday 21st of November 2022 03:33:55 AMCached Disp on: Friday 2nd of December 2022 02:15:05 PM