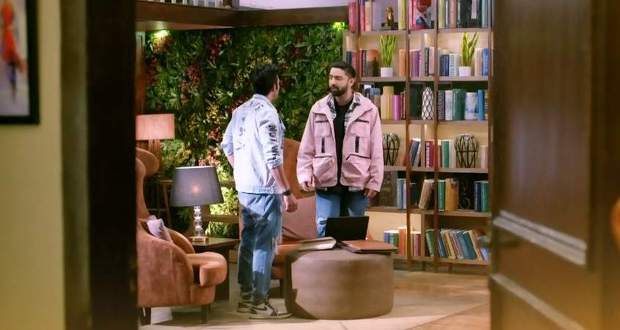 Telling this, Ahana hugs Lakshmi while Malishka eavesdrops on their conversation.

Ahana then urges Lakshmi to go the whole family with her and tell the truth.

However, Lakshmi denies it by claiming that they give Gautam some time to break the news to his family.

After hearing the truth, Malishka promises herself that she will make Rishi and Lakshmi’s divorce happen the next day,

At the same time, while walking Rishi and Ayush notice Malishka, and Rishi informs her that he is sure that Lakshmi is hiding something.

Hearing this, Malishka along with Ayush tries to reason with him but Rishi refuses their logic and walks away.

As planned, she goes to Karishma’s room and asks her if she can take Ahana for bridal shopping.

Karishma who is unaware of Malishka’s hidden motive happily allows her for it.

Afterward, while Lakshmi is showing her designer bridal dupattas to Ahana, Karishma barges into her room and orders Ahana to leave.

At first, Ahana tries to deny it by claiming that she wants to stay but Karishma is adamant.

After Ahana leaves, Karishma warns Lakshmi to stay away from her classy daughter.

Later in the living room, while discussing the wedding date and kundali for Ahana and Gautam, Neelam indirectly taunts Lakshmi by claiming that sometimes despite having a good kundali, someone can have the ability to ruin things.

Mr. Guzral then compliments Lakshmi on her food much to Neelam’s dismay.

However, their mood gets ruined when Balwinder arrives in the living room with the band.

Despite Ayush and Virendra’s warning, Balwinder asks Lakshmi why she is doing work during pregnancy.

When Neelam asks Balwinder to leave, he announces that he will go only with his family which confuses everyone.

Later when Rishi threatens Balwinder with police, he announces that Lakshmi is carrying his baby.

Hearing this, everyone is stunned but Balwinder narrates a fake story of him and Lakshmi consummating.