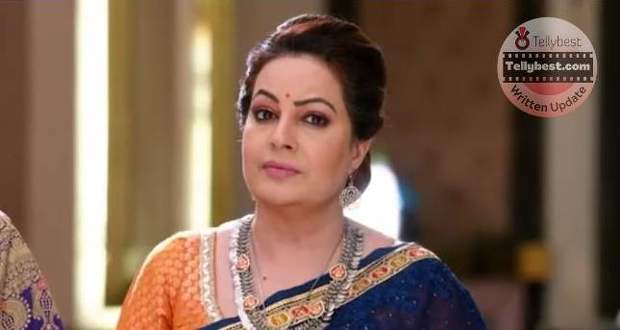 Today's Bhagya Lakshmi 20th November 2022 episode starts with Balwinder guiding Kiran inside the godown while Virendra gets creeped out by the place and wonders about Kiran’s whereabouts.

Kiran sees Malishka and lands a tight slap on her face for her stupid stunt.

On the other hand, Shalu worries about Ayush as he fights with his family for Lakshmi.

Lakshmi comes there in the room dragging Ayush behind her and schools her for misbehaving with Karishma.

Ayush says that the family makes him misbehave with them despite knowing that he will not go against her.

Shalu gets impressed by Ayush, who tells Lakshmi that he will always be by her side and won’t leave.

Lakshmi tells Ayush that she wants him to not disrespect his family.

Further, Ayush reminds Lakshmi and Shalu about the deadline given by the police to collect the proof of Lakshmi’s innocence which is 10 at night the next day.

Rishi calls Lakshmi during the break while she contemplates attending the call.

Ayush persuades her in attending the call and asks her to tell Rishi about Malishka’s kidnapping.

Rishi’s cheerful voice greets Lakshmi as she attends the call and he tells her about his good-going meeting.

Lakshmi fails to inform Rishi about the kidnapping as many interruptions come in between and disconnect the call.

Meanwhile, Kiran shouts at Malishka for being an idiot for planning her own abduction while Malishka calls herself a genius and smart girl.

However, she gets surprised when Kiran tells her that Lakshmi is not in jail.

On the other hand, Lakshmi wonders how her earring got into Malishka’s room.

Balwinder narrates the story of Malishka’s kidnapping to Kiran who in return tells Malishka that Rishi will hate her when he comes to know about Malishka’s truth.

The voice resonates in Malishka’s ear and she starts slapping herself madly followed by hitting her head on the chair.

Balwinder and Kiran stop Malishka from acting crazily while Malishka laughs maniacally saying that seeing all the scars Rishi will hate Lakshmi instead as he will believe in her only.

On the other hand, Lakshmi tells Ayush and Shalu that she heard Malishka talking to one of her friends about meeting someone at a disco.

Concluding that something might have happened there and Malishka can be in danger Lakshmi gets worried for her.

Ayush, Lakshmi, and Shalu decide to look for Malishka starting from the disco only.

Meanwhile, Virendra comes across the godown doors while looking for Kiran.

He thoughts of calling the police but decides to check on the situation himself.

Kiran again tries making Malishka understand the stupidity of her plan but Malishka asks Balwinder to record her.

Malishka asks Kiran to slap her for more scars and Kiran denies it.

However, Malishka’s provoking works out and Kiran slaps her hard.

© Copyright tellybest.com, 2022, 2023. All Rights Reserved. Unauthorized use and/or duplication of any material from tellybest.com without written permission is strictly prohibited.
Cached Saved on: Monday 21st of November 2022 12:43:27 AMCached Disp on: Saturday 10th of December 2022 03:05:20 PM