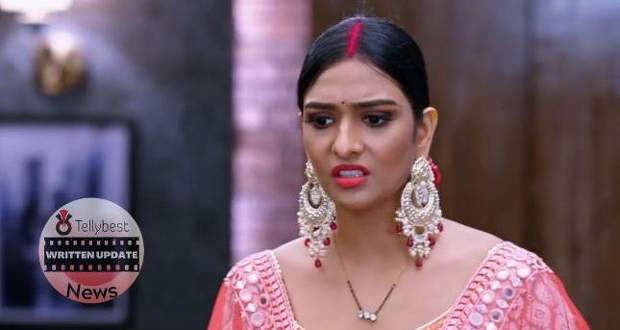 Before Neha can curse, Ayush reminds her that he is the god Ram right now and angry Neha walks away.

Shalu then yells at Ayush for teasing Neha while Ayush happily urges Shalu to touch his foot for a blessing.

He adds that he can feel unique energy after wearing a Ram costume.

Shalu then lowers her head to take the blessing, and Ayush smiles sweetly.

After Shalu walks away, Ayush goes to Rishi’s room to check and feels confused to see the room empty.

He even announces that only Rishi is fit for the Ravan Dahan and he should be Lakshman.

Meanwhile, Neha tells Shalu dreamily that Ayush was teasing her cutely and Shalu should not have interfered as Neha would have got more time to spend with him.

Shalu however recalls taking Ayush’s blessing and tells herself that for a moment she believed his words.

Ayush arrives there just then and looking at Shalu, he questions why Shalu is shooting daggers through her eyes.

Shalu watches with envy as Neha quickly wraps her hand around Ayush and stands near him.

Oblivious Ayush offers his other hand to Shalu but Karishma notices this and orders Ayush to walk with her.

Elsewhere, while searching for Rishi, Lakshmi falls to the ground and finds the worker’s unconscious body.

She frantically tries to wake the worker up and thinks maybe Rishi is in huge trouble.

Balwinder who is watching Lakshmi from a distance decides to text Lakshmi about Rishi being at home so she will go to the house and he will lock the door.

Meanwhile, the worker comes back to slight senses and informs Lakshmi about Rishi being in trouble.

After worried Lakshmi runs towards the mansion, Balwinder happily thinks that no one can stop Ravan of his life from death.

Meanwhile, during the puja, Neelam orders Karishma to do Ayush’s tilak but Ayush urges everyone to wait for Rishi.

Neelam orders Ayush to shoot the Ravan regardless and Ayush points the arrow toward the Ravan.

On one hand, Ayush throws the fiery arrow; on the other hand, Rishi frantically requests Ayush not to shoot.

Ayush's first attempt fails, and Neelam and other family members order him to carry on with the ritual.

Balwinder who is hiding yells that history will be written of a brother killing another brother.

Meanwhile, Lakshmi overhears Ram’s and golden deer's story and realizes that Rishi’s kidnapper is misleading her.

She then orders Shalu to stay with the worker while she searches for Rishi.

On the other hand, Malishka tries to confront Balwinder about Rishi's disappearance but Balwinder reminds her that he can reveal the hotel incident truth to everyone.

© Copyright tellybest.com, 2022, 2023. All Rights Reserved. Unauthorized use and/or duplication of any material from tellybest.com without written permission is strictly prohibited.
Cached Saved on: Monday 21st of November 2022 09:10:17 AMCached Disp on: Tuesday 29th of November 2022 10:56:32 AM