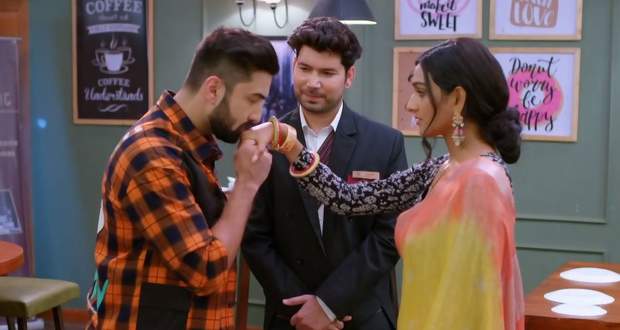 Rishi blames Lakshmi for creating issues between him and Malishka.

Further, Lakshmi takes Rishi's laptop and acts to have some work because she wants to say around Rishi.

Resting her face cutely on her hand, Lakshmi watches Rishi from the tip of her eye.

At the Oberoi mansion, Malishka complains to Neelam about Rishi kissing Lakshmi's hand.

This creates a big scene after Rishi returns from the office as Neelam scolds Rishi for being close to Lakshmi.

Rishi agrees and walks away.

When Virendra arrives home, Neelam asks him to talk to Rishi for making boundaries for Lakshmi in his life.

After some time, Ayush informs Virendra that he has to go to Mahabaleshwar for some work.

In Rishi's room, Rishi blames Lakshmi for getting him scolded by Neelam.

Lakshmi explains that she does everything because she cares for him.

When Rishi asks the reason for caring, Lakshmi stays quiet however, her eyes show the love she has for him.

Recalling how Lakshmi refused for being sexually aroused by him, Rishi moves closer to her and holds her hand.

Further, Rishi caresses Lakshmi's neck and face while he continues to gaze at her face starting from her lips to her eyes.

Though Lakshmi can feel the sensual tension between them, she says no every time Rishi asks her whether she can feel something.

In the meantime, Neelam asks Virendra to send Rishi to Mahabaleshwar instead of Ayush with the intention of keeping Lakshmi away from Rishi.

Meanwhile, Rishi and Lakshmi are restless because both of them felt the intimacy but they do not want to confess the same.