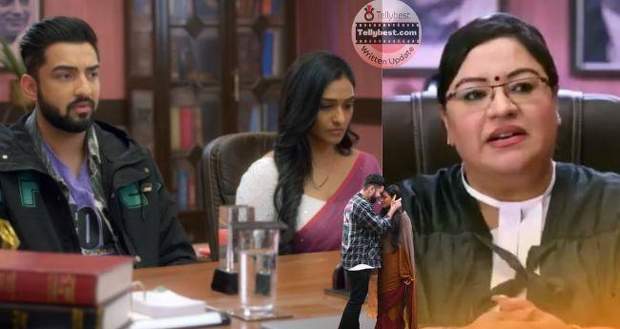 Today's Bhagya Lakshmi 21st December 2022 episode starts with the judge asking the family members to give their opinions first.

This confuses Harleen and she asks the judge the reason behind it and the judge reveals that sometimes couples don’t know that they have problems and it is the family members who realize it first.

When she asks the Oberoi family members to share their opinion, Neelam accuses Lakshmi of always creating troubles in Rishi’s life and Karishma also talks about Lakshmi being a bad omen for Rishi.

Hearing Karishma’s words, Harleen orders her to keep her mouth shut while Vrindrea announces Lakshmi and Rishi are made for each other.

Even Harleen announces Rishi and Lakshmi’s relationship is made by God which means only the almighty can separate them.

The judge then orders everyone to walk out as she wants to talk to Rishi and Lakshmi alone now.

Before leaving Ayush orders Rishi to confess his feeling to Lakshmi in a whispering voice whereas Harleen urges Lakshmi not to get scared because she has the white flower with her.

After Ayush and Harleen walk away, the judge orders Rishi and Lakshmi to confess what they want to do with their marriage now.

While Lakshmi looks at the judge blankly, Rishi just twists the white flower in his hands.

Meanwhile outside the courtroom, Virendra scolds Karishma for calling Lakshmi a bad omen and the judge arrives there at the same time and everyone gets stunned.

When Vrindera questions if the case is over or not, the judge replies the case is finished and Lakshmi and Rishi have already left.

On the other hand, during the car ride, Rishi thinks about his sweet memories with Lakshmi whereas Lakshmi just stays mute while the last night incident hangs between them like an invisible pillar.

Both of them lower their heads at the same time and their head collides with each other.

Meanwhile, in the court, the judge tells the Oberoi family that she is bound by duty and no matter what she personally thinks she needs to come to a conclusion.

Neelam questions the judge if Rishi has given Lakshmi a divorce, but the judge ignores her.

Turning to Harleen, the judge further states she is also shocked that Rishi and Lakshmi will choose this.

After a long pause, Rishi and Lakshmi both announce that they want divorce much to the judge’s shock.

When the judge questions Lakshmi if she wants any alumni, Lakshmi denies it with a blank expression.

The judge further advises Lakshmi to stay in the same house and Rishi announces it is Lakshmi’s home so she can live there as long as she wants.

Hearing this, the surprised judge remarks Rishi cares for Lakshmi this much yet he is giving her divorce to which Rishi replies he is doing this for Lakshmi.

Back in present, the judge apologizes to the Oberoi family for granting the divorce.

On the other hand, while Rishi and Lakshmi’s heads are joined together, Rishi urges her to reverse the divorce as he cannot live without Lakshmi whereas Lakshmi announces she cannot forget what Rishi has done with Malishka.

In the meantime, during the drive, Malishka and Sonal decide to break the news of Rishi’s sleeping with her in the Oberoi mansion.

Later, Rishi finds Lakshmi sobbing in the room and he is not able to see her upset like this.

Rishi then enters the washroom and breaks down in tears too while looking at himself in the mirror.