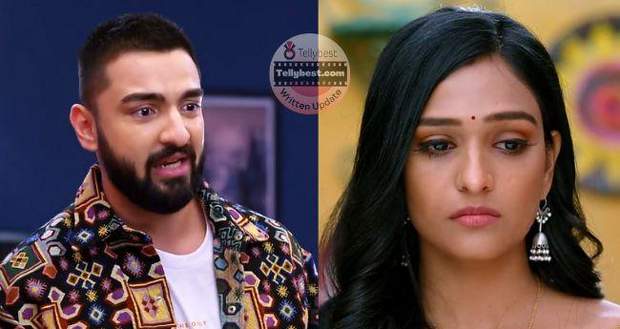 Today's Bhagya Lakshmi 21st January 2023 episode starts with Abhay announcing since the marriage is fixed they should fix the date too and he has also called the pandit for this.

Virendra rejects this idea by saying that he needs to attend his daughter’s wedding today which confuses Abhay.

When Abhay questions about this sudden daughter, Harleen mentions that it is Lakshmi’s marriage today.

Meanwhile, noticing Rishi lost in his wedding pictures, Malishka feels frustrated thinking that Lakshmi is marrying cheap Balwinder but Rishi is still lost in Lakshmi’s memories that he did not even realize her presence.

She tries to snatch the photo album from Rishi’s hand but instead she herself falls to the ground with a thud.

On the other hand, Bani and Shalu are discussing the possibility of Neha’s marriage and Pandit’s warning being a trap to force Lakshmi into marrying Balwinder.

At the same time, entering the house, Kamli introduces herself and asks for Lakshmi but when Bani mentions that Lakshmi will come home soon since it is her marriage, Kamli’s eyes widen with surprise.

She walks away without saying anything and Bani and Shalu stand there in confusion.

Back in the Oberoi mansion, Rishi helps Malishka to stand on her feet who yells at him for pushing her away.

Rishi tries to justify his action by saying that he has not done it intentionally and starts picking up the images while Malishka steps on his hand by mistake.

Malishka then urges Rishi to sit on the bed and her anger continues to rise seeing Rishi looking at the pictures.

With crocodile tears in her eyes, Malishka hugs Rishi while asking him if he will leave her after marriage just like he did with Lakshmi.

To calm Malishke down, Rishi stands up and puts his hands reluctantly wraps his hands around her.

Once Malishka calms down, Rishi again starts picking up the pictures while Malishka watches him with pent-up anger.

In the meantime, Lakshmi finds Kamli calling her fake when she enters her room and calmly tells Kamli that it was her parents' upbringing which is why she is ready to help Kamli.

When Kamli mentions that she has accepted Balwinder as her husband, Lakshmi promises to arrange the marriage.

On the other hand, looking at himself in the mirror in wedding attire, Balwinder mumbles happily that Lakshmi is getting a diamond.

When Guddu says that Balwinder is far better than Rishi, Balwinder announces that he has a fair skin tone, a beard, and a flat tummy just like Rishi and even adds that after only an hour Lakshmi will be in his arm.

Meanwhile, Lakshmi informs Kamli that she will sit in the mandap instead of her and as the marriage will be done with full ritual, Balwinder will not be able to reject it.

Back in the Oberoi mansion, Ayush enters Rishi’s room while saying something but stops as he finds Malishka sitting.

After Malishka walks away with an awkward look, Ayush is about to say something when his eyes land on the wedding picture.

He even reminds Rishi that he only loves Lakshmi and that he is allowing Lakshmi to marry someone new.

Rishi informs Ayush he only loves Malishka and he has tried everything but he cannot stop Lakshmi now and Ayush walks away without uttering any other word.

On the other hand, Balwinder's aunt does his tilak and gives Guddu some money after casting off the evil eye and Guddu gets excited as he has got the money for the next day's alcohol.

On one hand, Lakshmi hugs her sisters after Rano and Neha leave for the wedding venue and urge them to get ready; on the other hand, Balwinder makes his entry into the wedding venue with Bollywood style dance.

© Copyright tellybest.com, 2022, 2023. All Rights Reserved. Unauthorized use and/or duplication of any material from tellybest.com without written permission is strictly prohibited.
Cached Saved on: Wednesday 25th of January 2023 09:04:57 AMCached Disp on: Monday 6th of February 2023 05:30:31 AM