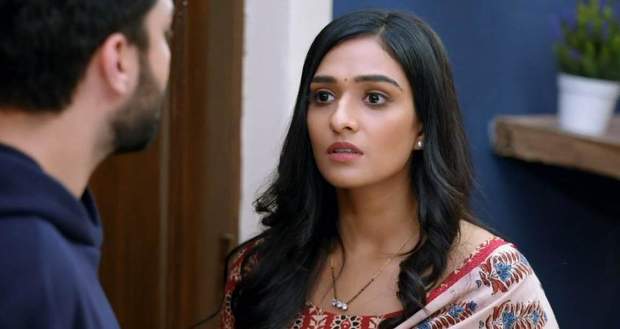 At the same time, Rishi and Ayush arrive there.

Hearing their voice, Balwinder pleads with them to open the door.

However, Rishi denies his pleading as he has no mood to deal with Balwinder's tantrum.

Using this opportunity, Ayush puts salt on Balwinder’s wound by locking him in the bathroom.

Rishi then orders Ayush to lock the room's main door of his bedroom.

At the same time, Malishka approaches them and asks Ayush to give her the spare key.

Ayush however denies it as he does not trust Malishka now and walks away.

After Ayush leaves, Malishka turns to Rishi to complain but he shrugs and says it is Ayush's decision.

Meanwhile, in the bathroom, Balwinder curses himself for obsessing over Lakshmi for so long.

On the other hand in the living room, Lakshmi tells everyone that she can open the door using coconut oil.

After Lakshmi and Ayush leave, Rishi asks everyone who could have helped Balwinder’s friends.

Hearing this, worried Malishka along with Kiran explains that they are sure Balwinder’s friends must have used an open window.

Returning to the living room again, Lakshmi informs everyone that Balwinder has locked the door from inside.

Dadi then announces that she will confront Balwinder in the morning much to Malishka’s shock.

Meanwhile, Balwinder promises himself that he will join a gym and drink alcohol in full motion.

Later in Rishi’s room, Lakshmi orders Rishi to stare in her eyes so they can stay awake.

At first, Rishi refuses to do this, but when Lakshmi taunts him for falling asleep, he agrees to do so.

At the same time, Soniya advises Malishka to confess everything to Neelam but she denies it.

Even Kiran manipulates Soniya by saying that it will lower Malishka’s chance of becoming Rishi's wife.

After Soniya leaves, Kiran and Malsihka get into an argument about Soniya.

During the argument, Malishka says she will put Rishi in her fate at any cost.

Later while Rishi and Lakshmi are staring at each other, Malishka enters their room.

Seeing them looking at each other with love, Malishka feels insecure.

Malishka then orders Rishi to stare at her the same way but Rishi fails miserably.

After angry Malishka leaves, Rishi and Lakshmi start staring at each other again.

© Copyright tellybest.com, 2022, 2023. All Rights Reserved. Unauthorized use and/or duplication of any material from tellybest.com without written permission is strictly prohibited.
Cached Saved on: Thursday 26th of January 2023 07:45:45 AMCached Disp on: Thursday 9th of February 2023 08:59:10 AM