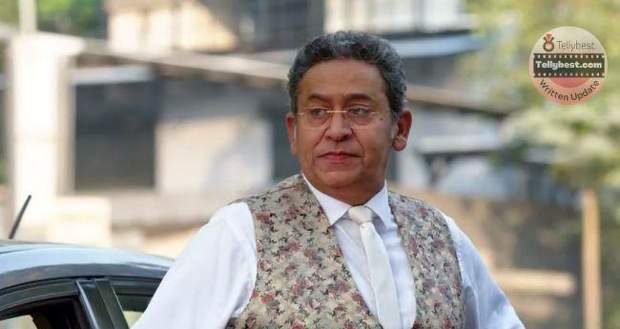 Turning towards Balwinder, Malishka orders him to take a good video of her swollen face so Rishi can feel sympathy for her.

On the other hand, while Lakshmi is questioning the disco owner about Malishka, a waiter passes by.

The owner of the disco denies knowing about Malishka but he calmly replies to Lakshmi that this is not the same bar and Lakshmi walks away.

Watching Lakshmi walking away, the waiter who is also Balwinder’s friend contemplates whether he should inform Balwinder about it or not.

On one hand, Virendra is walking slowly toward the noise in the godown and kicks a bear bottle by mistake; on the other hand, Balwinder admires Malishka’a acting while recording her video.

Haring the sound, Kiran questions Balwinder if someone is here but overconfident Balwinder announces he is sure some stray animals are roaming only.

With a big grin, Malishka orders Balwinder to drop this tape at Rishi’s office and Balwinder nods reluctantly.

Balwinder at the same time gets a call from the waiter who informs him that Lakshmi is searching for Malishka.

When Balwinder informs Kiran and Malishka about this, Kiran yells that now Lakshmi will not sit quiet till she proves her innocence.

She says that if the Oberoi family learns that Malsihka has kidnapped herself then they will break their ties with her which causes Malishka to frown.

On the other hand, Lakshmi calls Ayush to inform him that she going to the actual bar to check whereas Ayush replies he is also going to question Malishka’s neighbors.

In the meantime, Balwinder tells Kiran and Malishka that Virendra is here and they start hiding in panic.

While Virendra murmurs that he has seen Kiran coming here but now the godown is empty, Balwinder thinks he needs to protect himself from Virendra.

Kiran comes out from her hiding spot at the same time and questions Virendra why he is here.

Meanwhile, in Oberoi's mansion, angry Neelam tells agitated Karishma that she is just waiting for a moment.

On the other hand, in another Disco, Lakshmi urges the receptionist to give her the CCTV footage to check but she does not find Malishka in the video.

Elsewhere, in Godown, Virendra announces that neither he nor Rishi will believe even if Malishka says Lakshmi kidnapped her.

This angers Malishka and she mutters angrily that the Oberoi family only believes in Lakshmi’s words only.

Virendra feels as if he has seen someone around the corner and starts investigating it while Balwinder decides to hit Virendra on the head.

However, seeing the black paint on Malishka’s face, Virendra does not recognize her.

On the other hand, Lakshmi meets Abhay on the road and tells him that she will find Malishka very soon.

Meanwhile, Shalu calms down upset Bani by announcing that they need to find Malishka if they want to prove Lakshmi innocent.

© Copyright tellybest.com, 2022, 2023. All Rights Reserved. Unauthorized use and/or duplication of any material from tellybest.com without written permission is strictly prohibited.
Cached Saved on: Monday 21st of November 2022 12:44:15 AMCached Disp on: Wednesday 7th of December 2022 03:44:18 PM