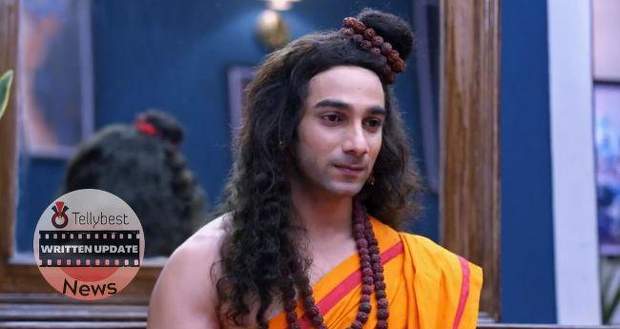 Today's Bhagya Lakshmi 21st October 2022 episode starts with Rishi yelling he will teach Balwinder a lesson as soon as he gets out while Balwinder overhears it.

To prevent someone from hearing Rishi's screaming, Balwinder turns up the speaker's volume.

Malishka however notices Balwinder and grabs his collar to know the truth about Rishi.

Balwinder reminds Malishka about Lakshmi roaming around so she should be careful; otherwise, if Lakshmi finds Malishka with him, she will be in trouble.

Angry Malishka looks at Balwinder for one last time and walks away while Balwinder smirks.

Meanwhile, Lakshmi closes her eyes and calls Rishi to know his location.

Rishi on the other hand informs Lakshmi about him being tied up inside the Ravan puppet and Lakshmi feels in her heart that Rishi is here.

Looking through a slight hole, Lakshmi sees a glimpse of Rishi’s cloth and realizes that Rishi is inside.

She yells at Ayush not to shoot the Ravan frantically but Ayush throws the arrow.

On the one hand, Balwinder feels happy about Rishi leaving his life forever; on the other hand, Lakshmi enters the Ravan puppet to save Rishi.

Lakshmi walks towards Rishi while the fire slowly spreads inside the Ravan.

She further starts untying Rishi’s hands without caring about the fire.

Balwinder who is looking at Rishi and Lakshmi from a distance throws a coconut.

The coconut hits Lakshmi on the head and Lakshmi starts feeling dizzy.

However, before Lakshmi can fall, Rishi catches her with one hand.

He even whispers to Lakshmi’s ear that he cannot live without her and Lakshmi’s eyes flutter open.

Unaware Ayush throws another fiery arrow and Rishi orders, Lakshmi, to run away without him and let him die.

Hearing this, angry Lakshmi slaps Rishi hard on the cheek and stops the arrow with her hand.

Meanwhile, Virendra notices Lakshmi's dupatta lying outside and informs everyone that Rishi and Lakshmi are inside.

He along with Ayush runs inside to save them.

Balwinder notices this and throws another arrow to kill Rishi without caring about killing Lakshmi in the process.

Meanwhile, Lakshmi falls unconscious inside the puppet and Rishi picks her up in his arm and runs out.

Later after putting Lakshmi down on the bed, Rishi frantically tries to wake her up.

He further scolds Lakshmi for risking her life but Lakshmi stays still.

Rishi then turns to everyone and pleads with them to order Lakshmi to open her eyes while Neelam orders him to calm down.

Rishi announces he is alright when Malishka tries to approach him.

On the other hand, Harleen, Bani, and Ahana are praying to God for Lakshmi’s health.

Meanwhile, the doctor informs Rishi that Lakshmi is unconscious due to shock while Malishka burns in jealousy seeing Rishi caring for Lakshmi.

© Copyright tellybest.com, 2022, 2023. All Rights Reserved. Unauthorized use and/or duplication of any material from tellybest.com without written permission is strictly prohibited.
Cached Saved on: Monday 21st of November 2022 06:16:34 AMCached Disp on: Monday 5th of December 2022 12:32:17 AM