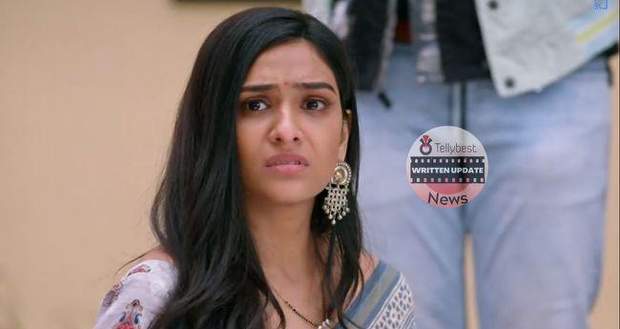 Today's Bhagya Lakshmi 21st September 2022 episode starts with Harleen telling the reporters that everyone will be okay as she believes in God.

On the other hand, Uday checks his phone which has switched off due to low battery.

He wonders how much of the drama he has recorded and decides to check it afterward.

Further, the police take away Munish and his allies while Harleen rushes toward her family and hugs them all.

Kiran looks at them with discomfort as she says that the Oberoi has forgotten them.

Abhay reminds them that it is because Malishka hasn't become a part of the family yet.

Meanwhile, Rishi sees tears falling from Lakshmi's eyes and asks her what the matter is.

Lakshmi says that she is happy to see the family together again while Rishi states that he was happy the same way when he got her safe.

Further, Rishi tells Lakshmi that he cannot even think of what happened inside the court and tells her that he is glad that she is out of there fine.

Lakshmi tells him that he doesn't need to tell her as she knows from his eyes and Rishi also tells her the same thing.

Back at the court, the ACP thanks the Oberoi family for their bravery while the media reporters start asking them about what happened inside.

The family members start pointing fingers at Rishi and Lakshmi stating how they were the ones who inspired everyone to fight against the terrorists.

On the other hand, Uday shows the video of the court to his assistant and tells him that he wonders why Lakshmi saved everyone from the terrorist while she is being accused of poisoning people and killing them.

Harleen tells Lakshmi that they should go home when the police officers come there and inform her that they have to take Lakshmi to jail.

The judge also informs them that they cannot take Lakshmi home legally as the hearing didn't end.

Rishi manages to convince the Judge to do Lakshmi's hearing right now as keeping Lakshmi in jail anymore will be an injustice to her.

Aayush gets awed by Rishi's determination to save Lakshmi and tells him that if he ever falls in love, he will try to be like Rishi.

On the other hand, Bani gets hysterical at home after realizing that she is safe and starts blabbering while Neha is glad that her mother is home safely.

Neha starts the TV and sees Uday showing the clips from inside the court on the news channel.

Back at the court, Rishi tells the Judge that he is at fault since he had used expired food materials which had turned poisonous and even forced Lakshmi to work with them against her will.

© Copyright tellybest.com, 2020, 2021. All Rights Reserved. Unauthorized use and/or duplication of any material from tellybest.com without written permission is strictly prohibited.
Cached Saved on: Friday 30th of September 2022 05:02:38 PMCached Disp on: Saturday 1st of October 2022 12:31:59 AM