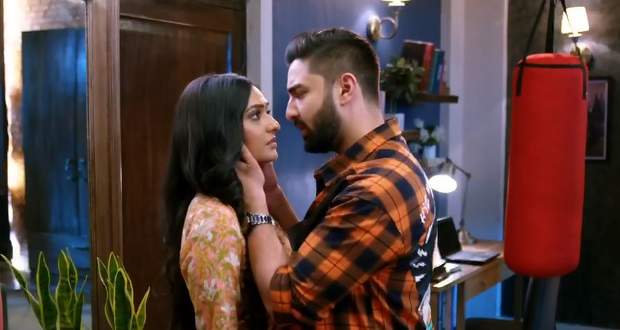 Today's Bhagya Lakshmi 22nd April 2022 episode starts with Virendra telling Rishi that he has to go to Mahabaleshwar instead of Ayush.

Rishi agrees because he also wants to go away from Lakshmi because staying near her is making him unable to avoid her.

In the meantime, Lakshmi gets a call from the Panditji who informs her that the Markeshdosh in Rishi's horoscope is going to trouble him from the next day onwards.

Hearing this, Lakshmi gets stunned and asks the priest whether she can do something to save Rishi.

The Panditji tells Lakshmi that she can save Rishi only by staying around him each and every second.

With all the details, the Panditji asks Lakshmi that she has to fight against the winds to stop them from reaching Rishi.

The Panditji also warns Lakshmi that once she saves Rishi, the Markeshdosh will affect her badly.

So, the Panditji asks Lakshmi to stay strong and safe as well.

Later, Rishi arrives in the room.

Suddenly, the lights go off.

So, Rishi lights a candle and holds it between him and Lakshmi to have a conversation.

Further, Rishi confronts Lakshmi about feeling something for her.

Lakshmi confesses that she has been experiencing something too.

When Rishi says that they must not live in the same room, Lakshmi refuses to let that happen.

Rishi and Lakshmi gaze into each other's eyes when the lights come back.

In the meantime, Karishma informs Malishka that Rishi is going away from Lakshmi to Mahabaleshwar.

Meanwhile, Rishi also informs about the trip to Lakshmi but she gets stressed recalling the priest's warning.