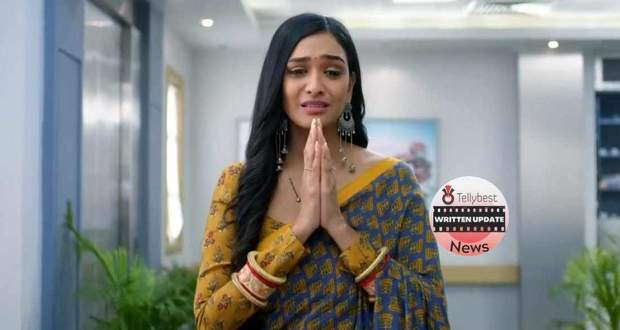 Today's Bhagya Lakshmi 22nd August 2022 episode starts with Aayush consoling Laxmi that whatever happened was not her fault and they were trying to give their best.

He further tells her that this was just an accident that happened unless it was a conspiracy.

Laxmi is stunned but Aayush explains to her that they tasted the same food but did not get ill then why others?

Meanwhile, Uday the journalist, and the police ask the doctor the reason for the illness and the doctor explains that it was poison found in their blood.

Uday thinks to himself that now he will see how Neelam Oberoi saves her daughter-in-law and her reputation from her money.

Neelam tells Malishka that she trusted her to look after Laxmi’s deeds, this confirms to Malishka and Kiran that Neelam has not heard their conversation so she plays with the act and seeks Neelam’s forgiveness.

Neelam tells her that Lakshmi is a mistake in Rishi's life and tells her to not do any negligence next time to which Malishka agrees.

On the other hand, Rishi is stressed that Laxmi has not called her.

Suddenly he gets a call from a reporter and the reporter tells him everything about the accident in a sarcastic way. He further warns Rishi that the police are taking the case very seriously.

In the Oberoi mansion, Ahana comes to Lakshmi to console her and tell her that Rishi trusts Laxmi.

During their conversation, Malishka enters and pretends to show sympathy for Laxmi.

Laxmi sends Ahana to look after Aayush and doubts Malishka about the hotel conspiracy.

Malishka gets shocked but does not accept, instead, she accepts that she is happy when Laxmi was being blamed for the accident.

Lakshmi makes Malishka look at herself in the mirror so that she can see her true self.

A frustrated Rishi books the first flight in the morning for Mumbai and worriedly wonders if everything is going well at home.

Later, the police barge into the Oberoi mansion and asks for Laxmi Oberoi. On this, Malishka comes forward and asks them what they want.

The police tell to take Laxmi for the charge of an attempt to murder.

On this Laxmi comes forward and clears the misunderstanding of police and tells them that she is Laxmi.