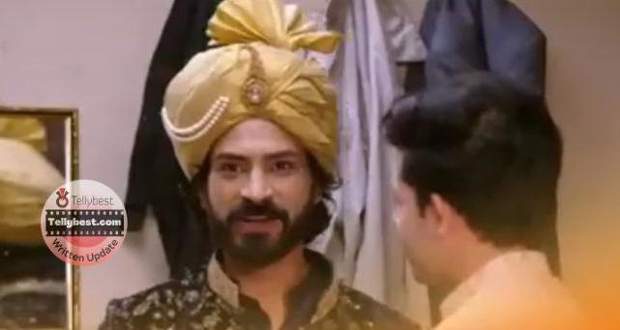 At the same time, entering the room, Sonal expresses her worry about Rishi trying to ruin Lakshmi and Balwinder’s marriage.

With complete confidence, Malishka informs Sonal that Rishi will not do this.

Meanwhile, in the wedding venue, Rano gives Lakshmi the lehenga to get ready and walks away.

After Rano walks away, Shalu takes the lehenga angrily but Balwinder’s aunt enters the room just then and orders Shalu not to do anything stupid.

She walks away after ordering Lakshmi to get dressed quickly and she will guard the door.

On the other hand during the car drive, Virendra expresses that he still cannot believe Lakshmi is marrying someone like Balwinder.

Neelam adds that it is good since Lakshmi will be out of their life soon, making everyone look at her in shock.

When Harleen asks her if she is involved in this, Neelam bluntly states that she only wanted Lakshmi out of Rishi’s life.

She even adds that Lakshmi is suffering due to her karma and Lakshmi is always bad luck.

While Harleen nods, Neelam thinks she is the one who is playing god here.

In the meantime, Rishi feels restless as Lakshmi’s memories flash before his eyes and he even starts working on a laptop to divert his mind.

He closes the laptop in frustration since he cannot concentrate and walks out of the room recalling Ayush’s advice for doing something.

Back in the wedding venue, Balwinder’s aunt stops a burkha lady going towards Lakshmi’s room and she stops her on the track.

Disguised Ayush starts buttering aunty by complimenting her for having glowing skin and even lies that Balwinder is the one who has called him to do Lakshmi’s makeup.

The aunty continues bragging about her beauty but disguised Ayush walks away from there.

Meanwhile, Guddu and the rest of Balwinder’s friends block the Oberoi family entry and announce that they will not let ruin Balwinder’s wedding.

Virendra tells them he desperately wants to stop the marriage when Rano butts in by saying that they have arrived here to do Lakshmi’s kanyadan.

Afterward, Balwinder asks Guddu about the Oberoi family’s arrival and Guddu reveals that Lakshmi has called them for her kanyadan.

Feeling happy, Balwinder lowers his veil and announces that Lakshmi’s fate has already started working since the Oberoi family is here attending his wedding.

On the other hand, Lakshmi gets surprised to see Ayush in the burkha and he announces that he is here to stop the two love birds from separating.

He even says that he is here to make Lakshmi run away from the wedding and Shalu gets excited.

They then get into funny banter but they stop when they hear a knock on the door.

As soon as Rano walks away, Lakshmi orders Ayush to leave but Ayush makes her unconscious by throwing a spray at her face.

Lakshmi falls unconscious and Shalu calls Ayush stupid for not making a proper plan as now they have no option but to take Lakshmi out of the venue.

On the other hand, Looking at herself in the mirror, Kamli tells herself that she will reach the wedding venue early and wait for Lakshmi's instruction.

At the same time, Rano gets a call from Balwinder who asks her to come to the mandap as the pandit is asking for something but Rano refuses by saying that she is busy doing her makeup.

When Balwinder mentions that Rano does not need to make up, Rano announces she even sleeps with makeup, and Balwinder comments that still Rano looks like a Naagin.

© Copyright tellybest.com, 2022, 2023. All Rights Reserved. Unauthorized use and/or duplication of any material from tellybest.com without written permission is strictly prohibited.
Cached Saved on: Wednesday 25th of January 2023 10:51:28 AMCached Disp on: Wednesday 1st of February 2023 09:10:05 PM