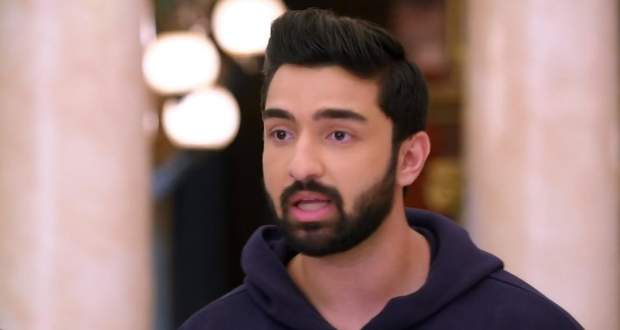 Seeing her picking up the bottles, Ayush says dramatically that he cannot believe his Dadi is a drunkard.

However, Harleen denies him by advising him to wait and watch.

Elsewhere seeing Rishi in Soniya’s room, Malsihka pretends to get scared of cockroaches and hugs him tight.

While patting Malishka on her back, Rishi asks her how she can get scared of tiny cockroaches.

At the same time, Lakshmi arrives there and gets jealous seeing Malishka wrapped around Rishi.

After separating them, Lakshmi orders Rishi to learn how to behave with girls in the house.

She even takes Rishi’s hand and leads him away much to Malishka’s dismay.

Meanwhile, in Rishi’s room, Harleen asks Ayush to open the bottle and make it fall.

Seeing the alcohol, Balwinder gets very excited and starts licking it on the floor.

He even bangs the door and pleads with Rishi to give him alcohol.

After opening the door, Dadi urges Balwidner to follow her to get the alcohol.

Like a puppy, he starts following her to the living room.

On the other hand, Lakshmi scolds Rishi for being so close to Malishka.

However, Rishi murmurs to Malishka’s ear something and she hugs Lakshmi the way she hugged him.

This gesture shuts Lakshmi and Rishi walks away.

After Rishi leaves, Lakshmi orders Malishka to stay away from her husband.

However, Malaika reminds her that Rishi is her soon-to-be husband and Lakshmi also leaves.

In the living room, Dadi announces that she will finish the drama today.

Rishi tries to object to it but Harleen orders him to close her mouth.

As per her, alcohol is Balwinder’s weak spot.

Drunk Balwinder tells everyone that he has told Malishka’s name but no one believes him.

Hearing his nonsense, Rishi asks Harleen if he is really in her control.

Dadi slaps Balwinder and this distracts everyone.

Using the distraction, he grabs Lakshmi and puts the knife on her neck.

He orders everyone to stay out of his track otherwise he will kill Lakshmi.

He then starts dragging Lakshmi with him to the entrance as he wants to marry her.

However, Rishi comes forwards and attacks him.

After Balwinder leaves, Lakshmi orders Rishi not to go anywhere.

Rishi tries to protest but seeing Lakshmi's worried face he stops himself.

Everyone is shocked to see Lakshmi acting like a mad woman.

While Ayush runs after Balwinder, Neelam along with others scolds Lakshmi for this.

© Copyright tellybest.com, 2020, 2021. All Rights Reserved. Unauthorized use and/or duplication of any material from tellybest.com without written permission is strictly prohibited.
Cached Saved on: Sunday 2nd of October 2022 10:02:54 AMCached Disp on: Thursday 6th of October 2022 04:37:30 PM