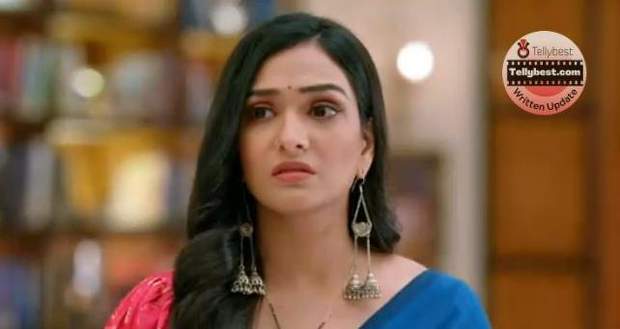 With a scoff, Karishma replies that Lakshmi has just a few hours till everyone sees her evil side.

Karishma even announces that if something happens to her precious soon-to-be daughter-in-law, Malishka she will make sure to ruin Lakshmi's life while Lakshmi just stands there in shock.

On the other hand, looking at Malishka’s black face, Balwinder jokingly adds that she looks like a ghost.

A flashback shows, how Malishka applied the black paint on her face to fool Virendra.

Back in present, angry Malishka starts yelling that Lakshmi has tarnished her image once again and how the Oberoi family always trusts Lakshmi this much.

She further adds that she will not let Lakshmi live with Rishi peacefully while Balwinder tries to calm her down.

Malishka then rudely orders Balwinder to bring Lakshmi to her feet for which she will give a lot of money.

At first, Balwinder tries to retort but hearing the amount of the money, Balwinder agrees to bring Lakshmi.

On one hand, Virendra and Kiran are discussing Kiran’s move and Kiran tells him that seeing the homeless girl, for a moment she thought this is actually Malishka; on the other hand, Malishka angrily clenches her fists while muttering that she will not let Lakshmi go.

Meanwhile, in the Oberoi mansion, Lakshmi is helplessly praying to lord Ram for Malishka’s safety.

She even announces that even though Malishka tries to get close to Rishi always, she does not think of harming her.

In the meantime, Balwinder calls his friend Guddu for help to kidnap Lakshmi for four crores which he will divide equally with Guddu.

Later, Guddu and Balwinder meet Balwinder’s old friend in the disco and Balwinder calls Lakshmi after changing his voice ordering her to meet him in a location alone for Malishka’s whereabouts.

Balwinder further adds that the gang is very dangerous and he just wants good for Malishka when Lakshmi tries to back off.

Hearing this, Lakshmi nods to meet alone and Balwinder cuts the call after giving the address.

Afterward, in the disco, Balwinder tells Guddu that he does want to marry Lakshmi anymore as she will be dead soon which confuses Guddu.

Balwinder then clarifies that he will just drop Lakshmi off at the godown for Malishka and she will take care of Lakshmi.

Balwinder further informs Guddu about Malishka’s plan of killing Lakshmi to which Guddu responds that Malishka has gone mad.

Later, at the location, Lakshmi finds a black masked man lying on the road and before she can understand another masked man grabs her from behind.

Despite a lot of struggle, the two masked men put Lakshmi in the car.

Later while the car is driving by, Rishi’s car is also passing by side by side.

Noticing Rishi, Lakshmi calls out to him desperately but Balwinder puts his hand on her mouth and closes the window.

© Copyright tellybest.com, 2022, 2023. All Rights Reserved. Unauthorized use and/or duplication of any material from tellybest.com without written permission is strictly prohibited.
Cached Saved on: Monday 21st of November 2022 11:20:16 PMCached Disp on: Thursday 1st of December 2022 11:58:54 AM