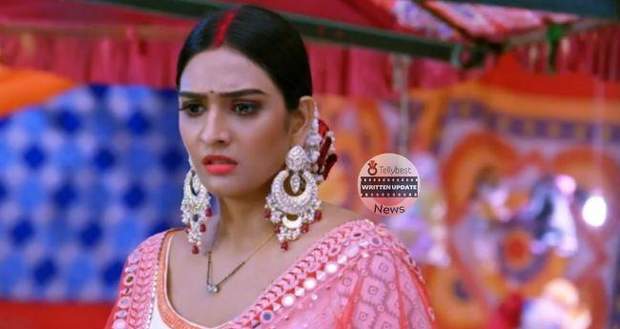 Rishi is about to take Balwinder’s name but stops himself as he does not want to cause any tension in the family.

He quickly lies that he does not remember and Neelam, Karishma, and Malishka walk away.

Meanwhile, frustrated Balwinder is throwing things around but Guddu stops him by advising him to think straight.

Balwinder even yells that Lakshmi loves Rishi very much; if Balwinder dies in front of her, she will not shed any tears.

Afterward, Guudu orders Balwinder to pack his bags as Rishi can come here any time but Balwinder sits in denial.

On the other hand, Rishi whispers to Lakshmi’s ear that Lakshmi has saved him just the way God Ram rescued Sita.

He then walks away from the room and starts thanking God for keeping Lakshmi safe.

He falls to the ground and questions himself why he feels so protective of Lakshmi and his eyes fill with tears.

While he is lost in Lakshmi’s thoughts, Ayush arrives there and hugs him.

Rishi comes out of Ayush’s embrace and questions Ayush in agony why he always saves Lakshmi before himself.

Putting his hands on Rishi’s shoulder, Ayush tells him firmly that Rishi loves Lakshmi very much that’s why he is ready to sacrifice his life for her.

He further adds that Lakshmi also loves him so Rishi should confess his feelings while Rishi just stands there.

On the other hand, while Shalu is crying and urging God to stop making Lakshmi’s life complicated, Lakshmi’s eyes flutter open.

Lakshmi then frantically asks for Rishi and Shalu tries to calm her down but Lakshmi starts looking for Rishi.

Meanwhile, Rishi denies Ayush’s words and announces that he and Lakshmi are very close friends.

He further adds that even though he likes Lakshmi, it is not love.

Malishka, on the other hand, calls Balwinder to yell at him for trying to kill Rishi and Balwinder also screams that Malishka has tried to kill his love several times so she should not provoke him.

Before Malishka can utter any more words, Balwinder cuts the call.

Meanwhile, Lakshmi arrives in the hall and finds Rishi at the entrance, and stops on her track as she gets lost in his eyes.

Lakshmi comes out of Rishi’s hug and announces that she can go to any length for him while Rishi questions Lakshmi why she feels this.

Looking at Rishi and Lakshmi, both Shalu and Ayush urge them to confess their love to each other in a whispering voice.

© Copyright tellybest.com, 2022, 2023. All Rights Reserved. Unauthorized use and/or duplication of any material from tellybest.com without written permission is strictly prohibited.
Cached Saved on: Monday 21st of November 2022 12:47:23 AMCached Disp on: Saturday 10th of December 2022 02:36:18 PM