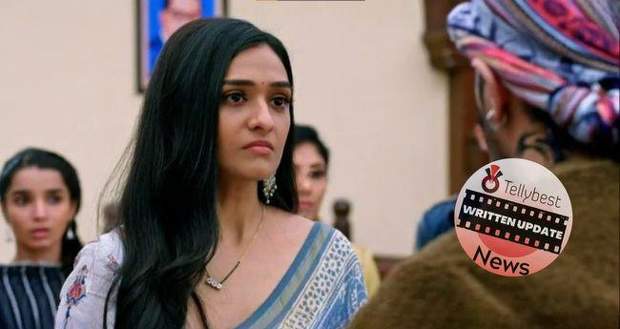 Today's Bhagya Lakshmi 22nd September 2022 episode starts with Lakshmi telling the Judge that Rishi is lying and that all the ingredients were of high quality.

Viendra stands up stating that he wants to say something but Aayush sees Rishi’s signals and tells Virendra to sit back down and let Rishi talk.

However, Lakshmi leaves the stand and runs to Rishi while scolding Rishi for lying and taking the blame on himself.

Rishi tells Lakshmi to shut her mouth but she keeps arguing with him.

Rishi reminds her of the vows they said to each other during their wedding and tells her that speaking in between will be breaking the vows.

Silencing everyone, Judge says that after today’s incidents, he knows how much Rishi and Lakshmi love each other and state that the case isn’t over and gives another date for the next hearing.

However, since Rishi has taken the blame on himself right now, he is guilty in the eyes of the law and will be jailed while Lakshmi is proven innocent for now.

The court is adjourned and Lakshmi holds Rishi by the collar out of anger as she questions him why he did it.

Rishi tries to calm the situation and tells Lakshmi that she can even slap him as he pulls her closer to him and hugs her tightly.

Just then, Neelam and Malishka tell Rishi that he did wrong and leave angrily while the rest of the family members praise Rishi for keeping his promise.

Afterward, Rishi’s hand slowly slips away from Lakshmi’s hold as the police take him away.

Lakshmi runs after the jeep in which Rishi is going and falls to the ground crying while Neelam stops Virendra from going to Lakshmi and makes him take her home.

Meanwhile, Neha sees the news and tells Rano about Rishi taking the blame on himself while Rano wonders if she should tell the police the truth about Balwinder.

Back at the court, Malishka angrily grabs Lakshmi by her elbow and wipes away her tears saying that she does not deserve to cry over Rishi going to jail.

Further, she takes a sweet from the passerby and forcefully stuffs it in Lakshmi’s mouth telling her to celebrate that she is out of jail.

Malishka tells Lakshmi to stop her drama and asks her what she told Rishi which made him take her blame on himself.

In the end, Lakshmi tells Malishka to shut her mouth as she does not need to explain to anyone what her love for Rishi means except for Rishi himself.

© Copyright tellybest.com, 2020, 2021. All Rights Reserved. Unauthorized use and/or duplication of any material from tellybest.com without written permission is strictly prohibited.
Cached Saved on: Saturday 1st of October 2022 10:23:35 PMCached Disp on: Wednesday 5th of October 2022 04:48:47 PM