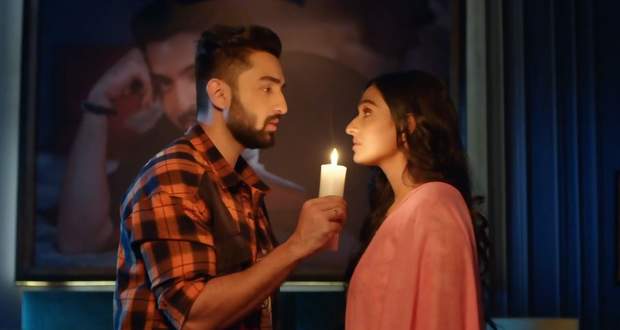 On her way, Lakshmi bumps into Malishka.

Though Lakshmi tries to walk away without arguing, Malishka provokes her.

However, fearless Lakshmi does not step back and gives her a befitting reply.

Lakshmi's confidence and words of truth hurt Malishka's towering ego and she asks Lakshmi to mind her tongue.

Malishka continues to show her overrated attitude but Lakshmi tries to explain to Malishka that she is mistaken in trying to separate a married couple.

Hearing this, Malishka says that her definition of marriage states the togetherness of two people who love each other.

Malishka also informs Lakshmi that she is going to Mahabaleshwar with Rishi.

Startled by this, Lakshmi says that she is Rishi's wife so only she has the right to accompany him.

Malishka challenges Lakshmi to see how Rishi takes Malishka along with him to Mahabaleshwar.

When Lakshmi returns with the bottle and he drinks the water, she insists on accompanying him on his trip.

Rishi refuses to let her come and goes to sleep.

As Lakshmi is worried about the priest's warning, she wonders how will she convince Rishi.

On the other hand, Malishka tells Sonia that she will surprise Rishi the next morning by being in his car for the trip.

The next morning, Lakshmi tries to convince Rishi to take her along but he refuses.

On the other hand, Malishka puts her bag into Rishi's car and stays in her happy zone of going with Rishi.

Meanwhile, Lakshmi makes an excuse of seeing Mahabaleshwar for the first time along with him but Rishi gives her a straight NO.