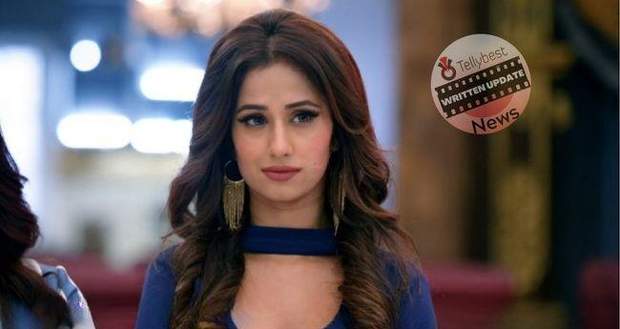 Today's Bhagya Lakshmi 23rd August 2022 episode starts with Lakshmi stating that she is the real Lakshmi and that Malishka came forward in a panic only.

The police inspector asks Lakshmi if she's the one who made the food and announces that she needs to come to the police station.

However, Aayush interrupts saying Lakshmi making the food doesn't prove that she is the one who put poison in it.

Malishka thinks that now it's time for her drama and comes forward acting as if she's in support of Lakshmi and argues with the police inspector.

The media reporters come there and demand to see Lakshmi while Malishka keeps stirring drama in hopes of making Lakshmi look bad in front of everyone.

Malishka notices Uday and starts getting violent with him ordering him to get out of the house.

Aayush takes Malishka away and tells her to not do any drama but she scolds him saying that she's trying to calm the situation.

Malishka further threatens of calling the commissioner which makes the reporters think that the Oberoi family is bribing the law.

Virendra takes the inspector aside to talk to him while Malishka orders the police constables to get the reporters out of there.

Neelam taunts Lakshmi for ruining the Oberoi family's reputation while praising Malishka for trying to fix everything.

On the other hand, Malishka twists her words in front of the media reports and makes them think that Lakshmi is in the wrong and that the Oberoi family is trying to cover it up.

However, as soon as Malishka re-enters the mansion, Harleen accuses Malishka of trying to frame Lakshmi which angers her.

Malishka starts acting as if she is upset by this accusation and leaves stating that she will not do anything anymore.

At the same time, Virendra and Aayush try to convince the Inspector that Lakshmi is innocent but the inspector states that they have to arrest Lakshmi as per their protocol.

Lakshmi gets arrested and taken away while Virendra, Aayush, and Harleen go after them.

The media starts questioning Lakshmi in the garden and Lakshmi breaks down while Aayush tries to block the reporters from talking to her.

As she is getting taken away, Lakshmi cries to Aayush and tells him that she wants Rishi there.

Lakshmi recalls all the times when Rishi saved her while Rishi is seen running on roads to reach home as soon as possible.

Later, Neelam announces that no one will save Lakshmi this time.

© Copyright tellybest.com, 2020, 2021. All Rights Reserved. Unauthorized use and/or duplication of any material from tellybest.com without written permission is strictly prohibited.
Cached Saved on: Friday 30th of September 2022 06:52:40 PMCached Disp on: Saturday 1st of October 2022 04:02:29 PM