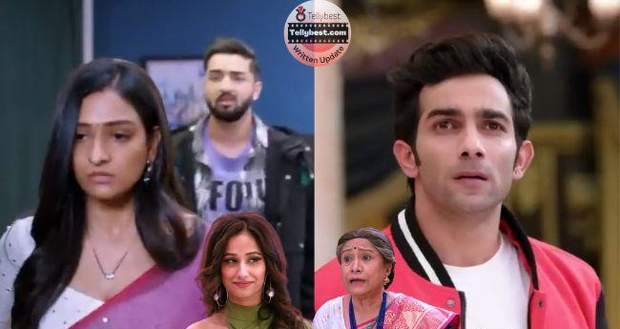 Today's Bhagya Lakshmi 23rd December 2022 episode starts with Lakshmi thinking she heard Rishi calling her name when she is about to cross the threshold.

She turns around to check while uttering Rishi’s name but Karishma orders her to leave as this is the perfect time to leave.

When Karishma yells that Lakshmi’s leaving is best for Rishi and the Oberoi family, Virendra orders her to shut her mouth.

Even Harleen screams at Karishma for offering Lakshmi to leave who is also the Lakshmi (Goddess) of the house but Karishma announces she is doing nothing wrong as legally Lakshmi is not Rishi’s wife anymore.

Looking at Lakshmi, Karishma further yells that now Rishi will also not come to stop her as Rishi is changed now.

While Karishma is busy yelling at Lakshmi, Ayush walks away thinking only Rishi can stop Lakshmi now.

Meanwhile, Rishi tells his alter ego that he will change Neelam’s mind very soon as he will not let Lakshmi suffer for his mistake but finds the door locked.

Outside the room, Malishka mutters that she will not let Rishi come out today to spoil her plan.

On one hand, Rishi’s alter ego mocks Rishi by saying that Lakshmi is the one who has closed this door; on the other hand, Malishka thinks now Rishi’s name will be written in her Bhagya instead of Lakshmi.

Rishi’s alter ego even informs him that Lakshmi has also closed the door of their relationship so Rishi cannot do anything making Rishi angry.

Meanwhile, Malishka hides in a room and sees Ayush walking toward Rishi’s room. She feels frustrated as Ayush can change Rishi’s mind.

In the hall, Lakshmi is about to cross the entrance when Harleen yells at Lakshmi to stop in a tear-choked voice.

Due to running, Harleen stumbles on her feet but Lakshmi grabs her, and Harleen then begs Lakshmi to stay as she is like a granddaughter.

When Harleen questions Lakshmi about how she will live without them and Lakshmi announces life always goes on.

Thinking if Rishi cared about her, he would come to see her for the last time, Lakshmi tells Harleen that sometimes people live without any reason.

Ayush even questions Rishi why he got divorced from Lakshmi and Rishi announces their relationship was bound to end.

Looking at Rishi’s sad face, Ayush begs him to stop Lakshmi as he cannot live without her but Rishi pushes him away muttering that only Ayush can take care of Lakshmi.

Later, when Lakshmi walks out of the mansion the images of her bridal entry flashes in her mind and everyone stares at her with wide eyes.

After Lakshmi and Rano along with Shalu and Bani walks away, Malishka whispers to Sonal that now she will be the new Lakshmi while Karishma goes to lock the door.

On the other hand, Ayush orders Rishi to come with her as Lakshmi is waiting for Rishi’s arrival and Rishi looks at him with zero expression.

Later, Karishma is throwing holy water in the mansion and Virendra walks out of the mansion.

When Rishi enters the hall, Karishma starts trash-talking about Lakshmi being the reason for Kiran's accident.

On one hand, Rishi walks away after announcing Lakshmi has done nothing wrong; on the other hand, Virendra meets Lakshmi outside the mansion.

© Copyright tellybest.com, 2022, 2023. All Rights Reserved. Unauthorized use and/or duplication of any material from tellybest.com without written permission is strictly prohibited.
Cached Saved on: Wednesday 25th of January 2023 10:46:20 AMCached Disp on: Monday 6th of February 2023 05:23:46 AM