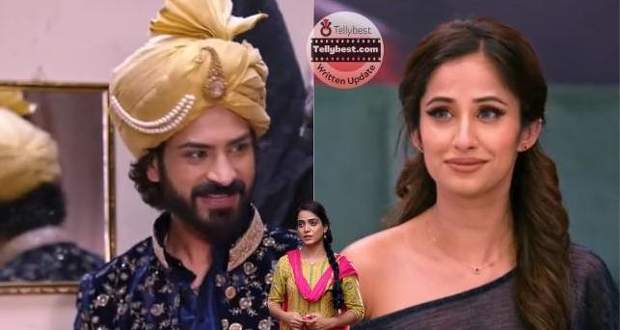 Today's Bhagya Lakshmi 23rd January 2023 episode starts with Rano telling Lakshmi that she is unable to get her makeup done because of her.

Rano is about to walk away when she hears disguised Ayush's male voice so she turns to check.

To divert Rano's mind, Shalu puts Lakshmi's ear near her to show that Lakshmi is murmuring something in her ear.

After Rano walks away, Ayush calls Shalu Charlie and urges her to change Lakshmi's dress.

Hearing the word, Charlie Shalu starts bickering with Ayush and Bani orders them to focus on the task at hand.

On the other hand, looking at Balwinder's friends laughing near the corner, Neelam gets irritated and announces that she is leaving.

Virendra stops her by saying that they are here to see Lakshmi one last time since Balwinder will take her somewhere else after marriage and even Harleen urges Neelam to stay.

When the aunt mentions that Balwinder has specifically told her not to move away from the door, Shalu tells her that Balwinder will be the husband of blind Lakshmi and brother-in-law of a blind Shalu.

This makes the aunt nervous and she runs away to bring the water.

Afterward, Shalu orders Bani and Ayush to run away with Lakshmi who is wearing Burkha now while Shalu will guard the doors.

Meanwhile, during the drive, Rishi imagines his alter ego telling him that he feels restless because Lakshmi is marrying Balwinder.

His alter ego tells Rishi that he is the only one who can stop Lakshmi's marriage.

Back in the wedding venue, Shalu praises Balwinder's aunt by announcing that she will praise her in front of Balwinder.

The aunty then announces that she hopes Balwinder gives her some money and Shalu nods her head eagerly.

After locking herself in the room, Shalu announces that she needs to keep Lakshmi's runaway hidden until Ayush calls her to come.

Back to Rishi, his alter ego changes his mind by reminding him about Lakshmi's determination of saving him all the time and Rishi announces that he will stop Lakshmi's marriage today.

Later, Bani and Ayush stop on their track when they find Guddu and his friends chilling near the car.

Once Guddu and his friends walk away, Ayush puts Lakshmi in the car and Bani orders him to call Shalu.

When Ayush mentions that his phone has no battery, Bani also tells him that she has kept her phone in the room.

Ayush orders Bani to bring Shalu back as it will take time for Lakshmi to wake up.

Meanwhile, in the room, Shalu assures herself by thinking she is sure Ayush has taken Lakshmi to a safe place.

When she opens the door, Balwinder's aunt walks in and orders Shalu to open the door only when Lakshmi is ready whereas Kamli is about to walk out of her house but she collides with a wardrobe.

Looking at her swollen foot, Kamli gets worried as she is not sure if she will reach the venue on time or not.

Later, while driving, Rishi finds some goons chasing Malishka and he drives toward them to save her.

On the other hand, Ayush gets surprised to see the car seat empty and starts searching for Lakshmi.

Later, on one hand, the pandit orders Rano to bring Lakshmi for the marriage which makes Balwinder blush.

On the other hand, Malishka collides with Rishi while she is running from the goons.

© Copyright tellybest.com, 2022, 2023. All Rights Reserved. Unauthorized use and/or duplication of any material from tellybest.com without written permission is strictly prohibited.
Cached Saved on: Wednesday 25th of January 2023 09:13:57 AMCached Disp on: Thursday 9th of February 2023 04:25:41 AM