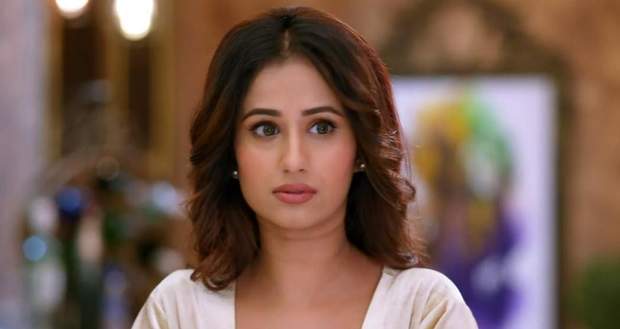 Ignoring his order, Balwinder starts his car and runs away from there.

Ayush notices a bike nearby and starts following Balwinder.

Meanwhile, in the Oberoi mansion, Karishma says that maybe Balwinder heard the news of Lakshmi’s pregnancy from somewhere else.

Rishi says he will follow Balwinder himself but Neelam stops him.

At the same time, the doctor arrives at the mansion and gives Rishi some medicine for his well-being.

While Ayush is following Balwinder, he hits a stranger on the road.

Elsewhere in the Oberoi mansion, Neelam orders Malishka to give medicine to Rishi but Rishi denies it.

Malishka quickly says that she will become Rishi’s wife soon.

Ignoring her words, Rishi says that Lakshmi is here to take care of him.

Hearing this, Rishi quickly starts taking Lakshmi's side and Ahana also joins him much to Malishka’s shock.

Later in the room, Lakshmi thanks Rishi for his support in the living room.

Rishi then grabs Lakshmi’s hand and tells her that she is his family till divorce.

The divorce word upsets Lakhsmi and she unknowingly puts her hand on Rishi’s wound.

This hurts Rishi and to apologize Lakshmi puts her hands on her ears.

To make Lakshmi smile, Rishi urges her to stay still so he can take a photo of her like this.

After Rishi takes a photo, Lakshmi prays to the god for Ayush’s safety but a framed picture of her and Ayush falls on the ground.

Meanwhile, on the road, Ayush dodges the truck by a slight distance.

Elsewhere in another room, furious Karishma tells Virendra and Neelam that she cannot believe Lakshmi talked back to her.

Virendra tries to make her understand that Lakshmi was stressed about Rishi but she walks away.

After she leaves, Neelam announces to Virendra that if something bad happens to her family then she will throw Lakshmi out of the house without caring about anything.

In Rishi’s room, Lakshmi and Rishi get into a funny banter about her saving Rishi.

During the banter, Rishi tells Lakshmi that if she has watched a comedy movie then she would have made him laugh like a mad person.

After the banter, Rishi asks Lakshmi if she is serious about feeling his pain.

Lakshmi just nods and Rishi asks why she put her hand between his hand and the door.

Lakshmi tries to lie but Rishi asks her to reply honestly.

© Copyright tellybest.com, 2020, 2021. All Rights Reserved. Unauthorized use and/or duplication of any material from tellybest.com without written permission is strictly prohibited.
Cached Saved on: Saturday 1st of October 2022 09:55:21 PMCached Disp on: Monday 3rd of October 2022 08:18:34 PM