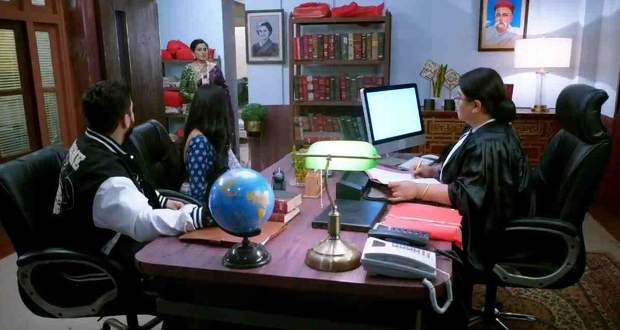 Today's Bhagya Lakshmi 23rd June 2022 episode starts with the judge asking if Rishi and Lakshmi have changed their mind or not about the divorce.

She even blames Rishi for not putting enough effort into the marriage.

Hearing this, Rishi angrily tells the judge that from his side everything is alright but Lakshmi is not telling anything to anyone.

Afterward, the judge asks Lakshmi why she is behaving like this but before Lakshmi can give a proper answer, Rishi interferes and they get into an argument.

Seeing them arguing, the judge smilingly announces that they are behaving like a married couple, not a divorced one.

She informs Rishi and Lakshmi that she thinks they are ready to stay together in the marriage.

Before anyone can answer, Neelam enters while announcing that the judge doesn’t know the truth.

At the same time in the Oberoi mansion, while praising Malishka for sending Neelam to the court, Karishma advises her to celebrate.

Meanwhile, in the court, Neelam tells the judge about Laskhmi’s pregnancy and how Rishi is not the father of her child.

Hearing this, the judge questions Lakshmi whether she is pregnant with someone else or not but Lakshmi stays silent.

Later while Malishka is preparing for Rishi’s arrival, Rishi arrives there with Lakshmi.

When Karishma asks Neelam why Lakshmi is back, Neelam reveals that the judge has given twenty-four hours to them to discuss pregnancy.

Hearing this, Malishka is heartbroken so when everyone is discussing Ahana’s engagement, Malishka starts throwing tantrums.

Seeing Malishka’s anger, Rishi tries to calm her down but angry Malishka walks away.

After Malishka leaves, Neelam orders Rishi to control the situation.

When frustrated Rishi enters the room and asks Lakshmi to explain her pregnancy, Lakshmi stares at him.

After waiting for a few minutes, Rishi angrily blames Lakshmi for his suffering.

Instead of answering, Lakshmi tells Rishi that she is suffering from the start of the marriage.

This statement fuels Rishi’s anger even more and he walks away from there.

Later during the dinner, Malishka informs everyone about Rishi being missing which makes Neelam worried.

At the same time, Lakshmi arrives there and tells everyone that Rishi will be okay.

Later while Lakshmi decides to go for Rishi’s search, Malishka enters the house with drunk Rishi.

Rishi then asks Lakshmi to answer his questions but Lakshmi orders the servant to take Rishi away.

After Rishi walks away, Malishka asks Lakshmi why she is playing dirty.

© Copyright tellybest.com, 2022, 2023. All Rights Reserved. Unauthorized use and/or duplication of any material from tellybest.com without written permission is strictly prohibited.
Cached Saved on: Friday 27th of January 2023 01:22:37 AMCached Disp on: Thursday 9th of February 2023 08:08:43 AM