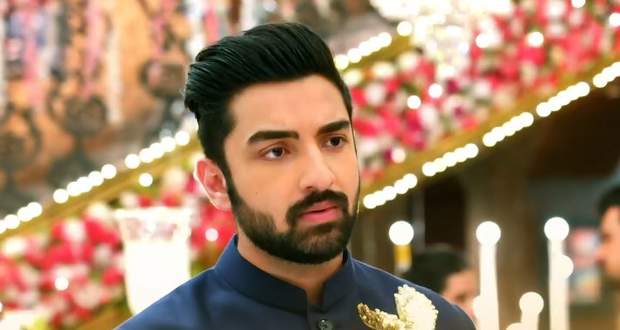 Today's Bhagya Lakshmi 23rd May 2022 episode starts with Lakshmi walking into the Oberoi mansion as demanded by Rishi.

Lakshmi and Rishi share a handshake while Lakshmi congratulates him for his engagement.

Further, Lakshmi confirms whether the engagement is completed as she was asked to witness it live.

Everyone is stunned to see that Rishi held Lakshmi's hand even after she tried to borrow it back.

Seeing Lakshmi's sad face, Baani suggests to Lakshmi that she go to her room.

Lakshmi says that someone has compelled her to witness the reality of Rishi and Malishka's engagement.

When Kiran complains about Lakshmi staring at them, Rishi says that nothing can stop him from getting engaged.

However, the only thing that matters to Rishi is hurting Lakshmi but he does not agree to accept this.

Further, Malishka complains about Lakshmi's presence on her special day. Rishi says that he wants Lakshmi to watch them get engaged.

On the other hand, Malishka spots Shalu and goes to taunt and sarcastically insults her.

Shalu does not step back and gives a befitting reply to her by reminding her of the black paint all over her face.

Malishka and Shalu keep arguing trying to prove each other wrong.

Further, Malishka thanks Shalu for breaking Lakshmi's marriage by telling the truth to the reporters which ended up with Rishi deciding to get engaged to Malishka.

Abhay tries to explain to Lakshmi that there is nothing left in her and Rishi's marriage as Rishi is marrying Malishka.

However, Lakshmi corrects him by saying that Rishi is getting engaged but marriage won't happen until she is there.

Abhay tells Lakshmi that as an elder he would suggest to Lakshmi to leave the Oberoi mansion at the earliest as no one loves her like before.

On the other hand, Shalu and Ayush as usual meet each other with an ongoing argument.

Though Shalu tries to explain to Ayush, he denies believing that Lakshmi loves Rishi instead of his money.