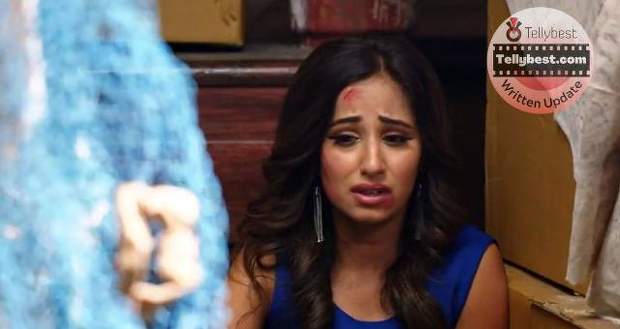 Today's Bhagya Lakshmi 23rd November 2022 episode starts with Lakshmi screaming in the car while Balwinder ties a black cloth around her eyes and mouth.

Meanwhile, Rishi feels guilty for shouting at Ayush for a small mistake and decides to purchase a gift for Ayush.

On the other hand, not finding Lakshmi anywhere in the Oberoi mansion, worried Ayush calls Lakshmi several times but when Lakshmi does not pick up, he gets even more scared.

In the meantime, Balwinder gets agitated when the car stops in the middle of the road and orders Guddu to repair it.

On the other hand, in Malishka’s home, Kiran informs Abhay that Malishka has kidnapped herself to get Rishi.

Feeling shaken, Abhay asks Kiran if Malishka has lost her mind to which Kiran replies that if Neelam finds out Malishka has tried to harm the Oberoi family's reputation, she will not let Malishka enter the Oberoi mansion again.

Abhay tries to blame Rishi by announcing that Rishi has driven Malishka to take this step.

Angry Kiran replies that they need to find a way to get Malishka out of this situation before Lakshmi finds out otherwise Malishka will be in jail.

Meanwhile, finding a sharp knife in the godown, Malishka starts sharpening it even more so it gets easier for her to stab Lakshmi.

In the meantime, on the road, Lakshmi’s last hope of escaping vanishes when Guddu restarts the car.

On one hand, Rishi happily thinks he will give Ayush a hug when he will reach home; on the other hand, Shalu finds Lakshmi’s car abandoned on the road.

Shalu then calls Ayush to inform him about Lakshmi is missing who orders her to send the location.

Later, Ayush arrives at the same location where Shalu is waiting for him.

Ayush announces that he will soon find Lakshmi when worried Shalu tells him that she thinks Lakshmi is in grave danger.

Meanwhile, Balwinder drops off Lakshmi in the godown and Malishka unties Lakshmi’s hands after which Lakshmi puts the black cloth down.

With an angry voice, Malishka starts telling Lakshmi that she has done all this to get Rishi.

She further adds that she feels frustrated as neither Virendra nor Rishi will ever believe Lakshmi has kidnapped her.

When Lakshmi announces that she will tell everyone the truth as soon as she gets out of this, Malishka sarcastically remarks that Lakshmi was nothing, she made Lakshmi Rishi’s wife.

Hearing this, Lakshmi snaps at Malishka, and by putting her hand on her mangalsutra, Lakshmi yells that Rishi is her only and no one in the world can separate them.

Moving around Lakshmi, Malishka hysterically yells that Rishi is only hers and even tries to slap Lakshmi but Lakshmi holds her hand.

© Copyright tellybest.com, 2022, 2023. All Rights Reserved. Unauthorized use and/or duplication of any material from tellybest.com without written permission is strictly prohibited.
Cached Saved on: Wednesday 23rd of November 2022 11:21:12 PMCached Disp on: Sunday 4th of December 2022 11:22:54 PM