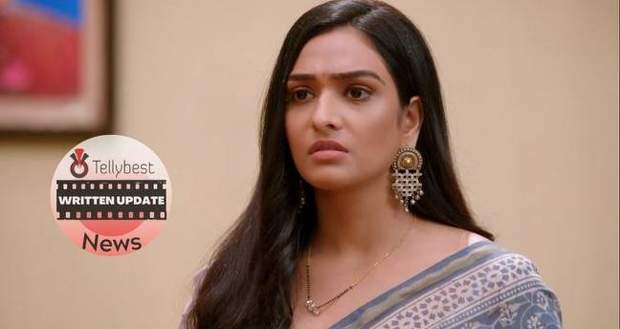 Today's Bhagya Lakshmi 23rd September 2022 episode starts with Lakshmi telling Malishka that she knows very well about her and Rishi’s love and tells her to look at herself before saying anything to her.

Dadi and Aayush favour Lakshmi saying that Lakshmi has no idea about Rishi’s step.

Malishka calls Lakshmi inauspicious which angers Shalu but Aayush tells her to not become like Malishka.

Soniya also favours Malishka while Aayush calls Rishi lucky to have Lakshmi while Malishka tells Aayush that Rishi is unlucky to have a brother like him.

Karishma tells Aayush that Malishka loves Rishi and will soon become his wife.

Seeing them fight like cats and dogs Dadi quietens everyone from making a scene in the public place and gets sick.

Lakshmi tells Dadi to not worry as Rishi will soon get free.

Meanwhile, Neelam questions Virendra Oberoi for favouring Lakshmi and not doing anything for Rishi.

Virendra tells her that Rishi is right to go in place of Lakshmi and he would have done the same.

Neelam calls their relationship at parallel ends and asks Virendra to leave her alone.

After a while, Aayush and Lakshmi bring Dadi to her room where Ayush tells her to not take Malishka’s words at heart and focus on her health.

Lakshmi assures Dadi that they will get Rishi free soon.

Meanwhile, Malishka comes to Rishi and tells him that she would have gone to jail instead of Rishi if he would have told her.

Rishi asks her about Lakshmi and tells her that he knows that Lakshmi is not happy in his absence.

At home, Lakshmi is praying for Rishi and asks God to help Rishi get out of jail.

Later, Rishi tells Malishka that he doesn’t really know his feelings for Lakshmi while Malishka tells her to choose one answer either yes or no.

Meanwhile, Lakshmi tells Aayush that Rishi has kept his promise and now she will free Rishi and find the real culprit and will also save Oberoi's reputation and name as well.

Aayush tells Lakshmi that she is a mother figure to him and he will always stand beside her.

Aayush asks her what to do next when Lakshmi tells her that now God will guide them to the right path.

In the jail, Malishka does not want to believe that Rishi loves Lakshmi and asks him if he only likes her or if there is something more.

Just then constable comes to ask Malishka to go else she will not be granted entry next time.