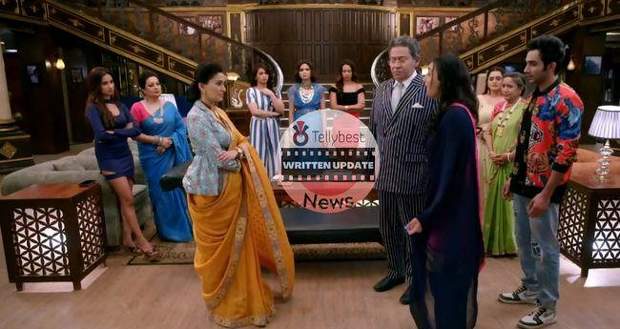 Today's Bhagya Lakshmi 24th August 2022 episode starts with Neelam telling the whole family that no one will help Lakshmi this time.

Harleen and Aayush try to speak in Lakshmi's favor but Neelam stops them saying that her decision is final.

Virendra stops Neelam and tells her that they will be humiliated more if they don't save their daughter-in-law.

However, Neelam taunts him saying that he should focus on his business, and tells him that only Lakshmi should be blamed for all the drama, not the Oberoi hotel or anyone else.

Shalu who is hearing everything from the door feels disgusted to be associated with such a family who doesn't think about their daughter-in-law.

Meanwhile, Lakshmi is thrown into the cell and another lady named Malti there mocks her and asks her what crime she has done while Lakshmi begs to call at least once.

Elsewhere, Rishi runs on the road to reach home as soon as possible when he collides with a car and gets taken to the hospital in an ambulance.

Lakshmi feels as if Rishi is calling out to her and slides down the wall as she cannot do anything.

Rishi's manager goes to the hospital and tries to call Aayush but fails to connect to his phone.

Back in the Oberoi mansion, Shalu enters the house and calls out to Neelam for making the family stay away from helping Lakshmi who is innocent.

Neelam tells Shalu to be within her limits while Karishma and others insult Shalu.

Shalu reminds everyone how Lakshmi almost died on the day of the Pooja and how no one's reputation could have saved her.

Shalu looks back at Aayush and tells him that she's disappointed in him after which she leaves saying that she will save Lakshmi at any cost.

Aayush stops Shalu and is about to tell her that he is coming with her to help Lakshmi but gets stopped by Karishma and Neelam.

After Shalu leaves, Aayush bursts out and calls out to Neelam and Karishma for not even thinking about what they are doing.

Karishma tells Aayush that the Oberois are at loss because of Lakshmi but Aayush stands up for Lakshmi.

Karishma slaps Aayush and tells her that she will not tolerate him saying anything against Neelam.

Virendra shouts for everyone to stop and tells Neelam that Aayush is correct.

Further, Neelam tells the family that no one will inform Rishi about anything and threatens to ruin Aayush if he tells Rishi anything.

Meanwhile, at the police station, Shalu requests the police officer to let her see Lakshmi for once.

At the same time, Rishi is being operated on as he keeps mumbling Lakshmi's name.

© Copyright tellybest.com, 2020, 2021. All Rights Reserved. Unauthorized use and/or duplication of any material from tellybest.com without written permission is strictly prohibited.
Cached Saved on: Friday 30th of September 2022 05:22:18 PMCached Disp on: Saturday 1st of October 2022 01:44:51 AM