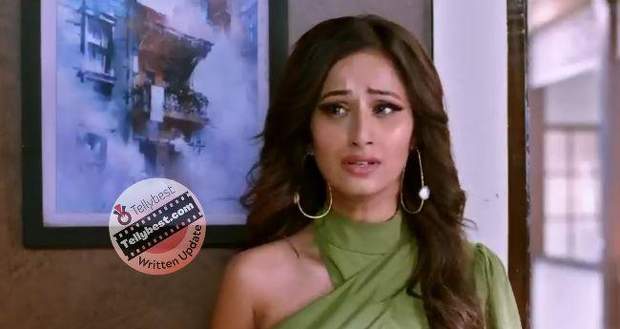 Today's Bhagya Lakshmi 24th December 2022 episode starts with Virendra questioning Lakshmi about why she is leaving the home now.

Virendra even announces that something must have happened which has caused Lakshmi to take this decision while Lakshmi looks at him with a poker face.

Virendra then offers Lakshmi to take some money until he arranges a home for her and when Lakshmi refuses to take it, Virendra puts it on her palm.

Looking at Virendra’s sad eyes, Lakshmi tells him that she cannot take anything from him and Virendra questions her if he can come to visit her whenever he wants.

In reply, Lakshmi informs Virendra in an emotional voice that he is her father so he can come to meet her anytime he wants causing Virendra to get teary.

Virendra also promises Lakshmi that he will make Lakshmi come back putting his hand on Lakshmi’s face like a father.

When Lakshmi turns to leave, Virendra starts sobbing silently and Lakshmi is also walking away with tears in her eyes.

Later, when Rano returns home with Lakshmi and her sisters, Neha gets stunned and she starts questioning Lakshmi why she divorced Rishi since he is rich and also very handsome.

Neha even urges Lakshmi to reveal the reason for the divorce but Rano orders her to close her mouth because Lakshmi will not reveal the truth no matter what.

On the other hand, in Malishka’s house, Kiran enters Malishka’s room to check on her but gets angry when she finds Sonal’s belonging.

Finding Kiran in the room, Malishka happily informs her that she will become Mrs. Oberoi very soon whereas Sonal self praises herself for making Lakshmi exit Rishi’s life permanently.

However, Kiran slaps Sonal and orders her to leave the house now with an angry voice.

Sonal walks out of the room while looking at Kiran with angry eyes and Malishka tries to stop Sonal but Sonal walks away murmuring that if she was not Malishka’s mother, she would have slapped her hard.

After Sonal walks away, Malishka questions Kiran why she did this but Kiran angrily walks out of the room.

Meanwhile, on one hand, Neha and Rano are busy discussing how Neha will marry Ayush now; on the other hand, Bani and Shalu are consoling Lakshmi.

In the meantime, Malishka is calling Sonal to apologize but Sonal does not pick it up.

Malishka even calls Aashish to know about Sonal’s location but Aashish orders her to reveal what has happened.

When Aashish announces he will be meeting Sonal in the hall, Malishka orders him to wait till she reaches there.

After Aashish cuts the call, Malishka mutters to herself that Sonal is very lucky to get a boyfriend like Aashish.

On the other hand, Rano questions Lakshmi if she has taken the alimony from the Oberoi family but Lakshmi denies it.

Rano gets angry after hearing it and announces she will teach the Oberoi family a lesson.

In the meantime, Sonal meets Aashish in the cafe and Aashish informs Sonal about Malishka coming here soon.

Later, Rano decides she will do something to get the money from the Oberoi family as Lakshmi is not planning to do it.

On the other hand, while Sonal is bitching about Malishka to Aashish, Malishka arrives there to meet her anger.

Meanwhile, Rishi is getting upset thinking about Lakshmi.

© Copyright tellybest.com, 2022, 2023. All Rights Reserved. Unauthorized use and/or duplication of any material from tellybest.com without written permission is strictly prohibited.
Cached Saved on: Wednesday 25th of January 2023 11:39:58 AMCached Disp on: Monday 6th of February 2023 04:50:16 AM