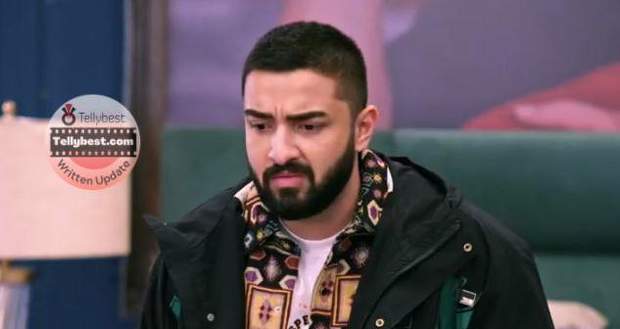 When the goon calls Rishi lover boy, Malishka tells Rishi how she found a goon lying on the street but when she stopped to check, he grabbed her hand.

The goons then mock Rishi by making weird faces towards him which fumes Rishi’s anger and he starts strolling towards them in slow motion while Maliska just watches him from a distance.

Meanwhile, in the wedding venue, when Rano arrives to take Lakshmi to the mandap, she finds someone sitting there with a long veil.

She urges that girl to show her face but when the girl refuses by pulling the veil a little down, Rano thinks today Lakshmi has become money for her as Lakshmi will bring money from Balwinder and Neelam.

At the same time, Balwinder’s aunt also arrives there and asks about the other girls but Rano orders her to focus on Lakshmi only since she is the bride.

On one hand, Bani pleads with a stranger to let her call Shalu.

Meanwhile, Ayush is worried as he thinks someone must have kidnapped Lakshmi.

Elsewhere in the Oberoi mansion, Kiran expresses her worry about Rishi-Malishka’s wedding as every time Rishi and Malishka’s marriage gets fixed, something happens.

Karishma calms down Kiran by saying that since Lakshmi is getting married now, so no problem will occur in Malishka’s marriage.

Back in the wedding venue, looking at the girl wearing a red lehenga, Balwinder thinks Lakshmi is looking extremely beautiful with an expression of a little kid who has just got candy.

Balwinder even lifts his veil and mumbles that now he will first see Lakshmi’s face before the ritual begins.

As soon as the girl sits beside Balwinder in the mandap, Balwinder tries to lift her veil but Balwinder’s aunty orders him not to do it as it will be bad luck.

While Virendra and Harleen look pissed off, a happy Balwinder orders the pandit to finish the ritual quickly so he can see his bride’s face and even offers extra money.

On the other hand, Rishi beats the goon furiously despite Malishka’s urging him to run away with her.

At the wedding venue, Bani picks up Lakshmi’s burkha but before she can figure out what happened, Guddu informs Bani that Lakshmi and Balwinder’s wedding has begun already.

Guddu walks away after reminding Bani that this is Lakshmi’s second marriage and Balwinder’s third marriage.

Afterward, Bani tells Ayush with teary eyes that they have failed to stop the marriage and also reveals that she texted Shalu and urged her to keep the situation under check for some time.

Meanwhile, Kamli cures her foot and announces that now her unborn baby will get the name of the father but before she can leave the room she falls unconscious.

On the other hand, Shalu gets nervous as Balwinder urges her to pick the flower garland to put on his neck.

Balwinder even offers to treat Lakshmi like a goddess after the marriage whereas Harleen tells Virendra that now Lakshmi is feeling scared.

However, Shalu puts the garland on Balwinder’s neck with shaky hands while Balwinder feels happy as Lakshmi is obeying him.

Later, on the streets, Rishi leaves Malishka with the goons as he needs to go somewhere and walks away.

Malishka orders the goons to stop Rishi from walking.

In the meantime, Rano and Neha are super happy as they will get more money from Neelam and Balwinder soon while the wedding ritual continues.

On one hand, Ahana takes a dizzy Lakshmi away; on the other hand, Bani and Ayush are sulking in the corner as their plan has failed.

© Copyright tellybest.com, 2022, 2023. All Rights Reserved. Unauthorized use and/or duplication of any material from tellybest.com without written permission is strictly prohibited.
Cached Saved on: Wednesday 25th of January 2023 09:17:07 AMCached Disp on: Tuesday 31st of January 2023 08:06:01 PM