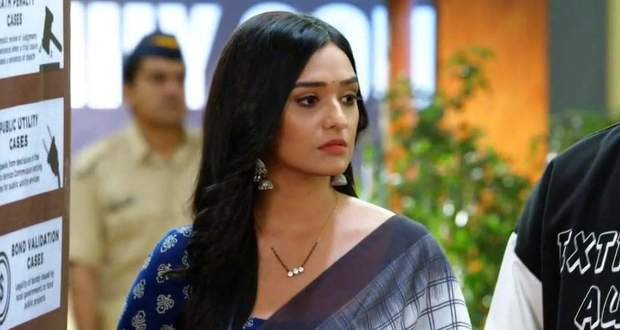 However, before Malishka can utter any more nonsense Lakshmi stops her and claims that Malishka can never win love with her tactics as love is never meant to win.

She even advises Malishka to spend some time with herself so she can understand that she cannot win Rishi over by playing stupid games.

Meanwhile, when Lakshmi starts taking Rishi’s shoes off, drunk Rishi asks her "With what rights are you touching me?"

Instead of answering, Lakshmi tells Rishi that he is not in the right mindset to know the answer but Rishi keeps pestering her about it.

Knowing Rishi’s stubbornness, Lakshmi blurts out that she is Mrs. Rishi Oberoi and that gives her enough power to take care of Rishi.

Afterward, Lakshmi tries to walk away but Rishi stops her and says that Lakshmi’s smile is his favorite and she should not lose it.

Further, Rishi asks Lakshmi if she remembers Rishi’s promises that no matter what happens between them, he will never leave her side.

Hearing this, Lakshmi gets emotional and starts getting flashbacks of her and Rishi’s happy moments.

At the same time, while Neelam is thinking about Lakshmi’s leaving, Malsihka approaches her and complains about Lakshmi ruining her life.

Hearing this, Neelam assures Malishka that the next day everything will be alright.

Instead of claiming down, Malishka announces that Lakshmi’s Bhagya is too strong and that’s why she always gets her way.

She even informs Neelam how Rishi came back home drunk and how Lakshmi once again played the Sati-Savitri role in front of her.

Later in Rishi’s room, Rishi reveals to Lakshmi that he misses the days when there was no complication in his life.

However, Rishi then blames Lakshmi for breaking his trust and Lakshmi bears Rishi’s hurtful words silently.

Meanwhile, Malishka starts manipulating Neelam by saying that if Lakshmi can fake her own kundali then she can do anything.

Hearing this, angry Neelam promises Malishka that the next day Rishi will take divorce from Lakshmi.

The next morning, while Lakshmi is lost in her thoughts about Gautam and Ahana’s pregnancy, Neelam approaches her and at the same time, Rishi also enters there.

Seeing Rishi there, Neelam orders Lakshmi to tell the truth to the judge in the court.